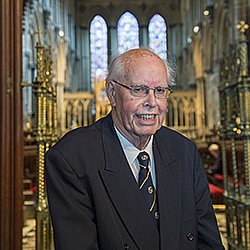 Death of an English composer, 94

Ely Cathedral has reported the death this morning of Dr Arthur Wills OBE, its director of music from 1958 to 1990.

The incumbent, Edmund Aldhouse, writes: ‘Arthur Wills was a towering figure in English Cathedral music, and far beyond, for much of the twentieth century and to this day. As well as his daily work in Ely, he held a professorship for many years at the Royal Academy of Music. In both posts he taught and inspired countless musicians, young and adult, who went on to enrich this country’s musical life. Arthur was also a virtuoso organist and a composer of distinction, with an instantly recognisable musical language, and a talent for capturing the mystery and beauty of the written word in music.’

He wrote a book, The Organ, for the Menuhin Music Guide Series.

There are some wonderfully old-fashioned views in this video on sexual inequality. One little chap says ‘I want to be a music critic later on.’

The Vienna Philharmonic is flying to Japan »