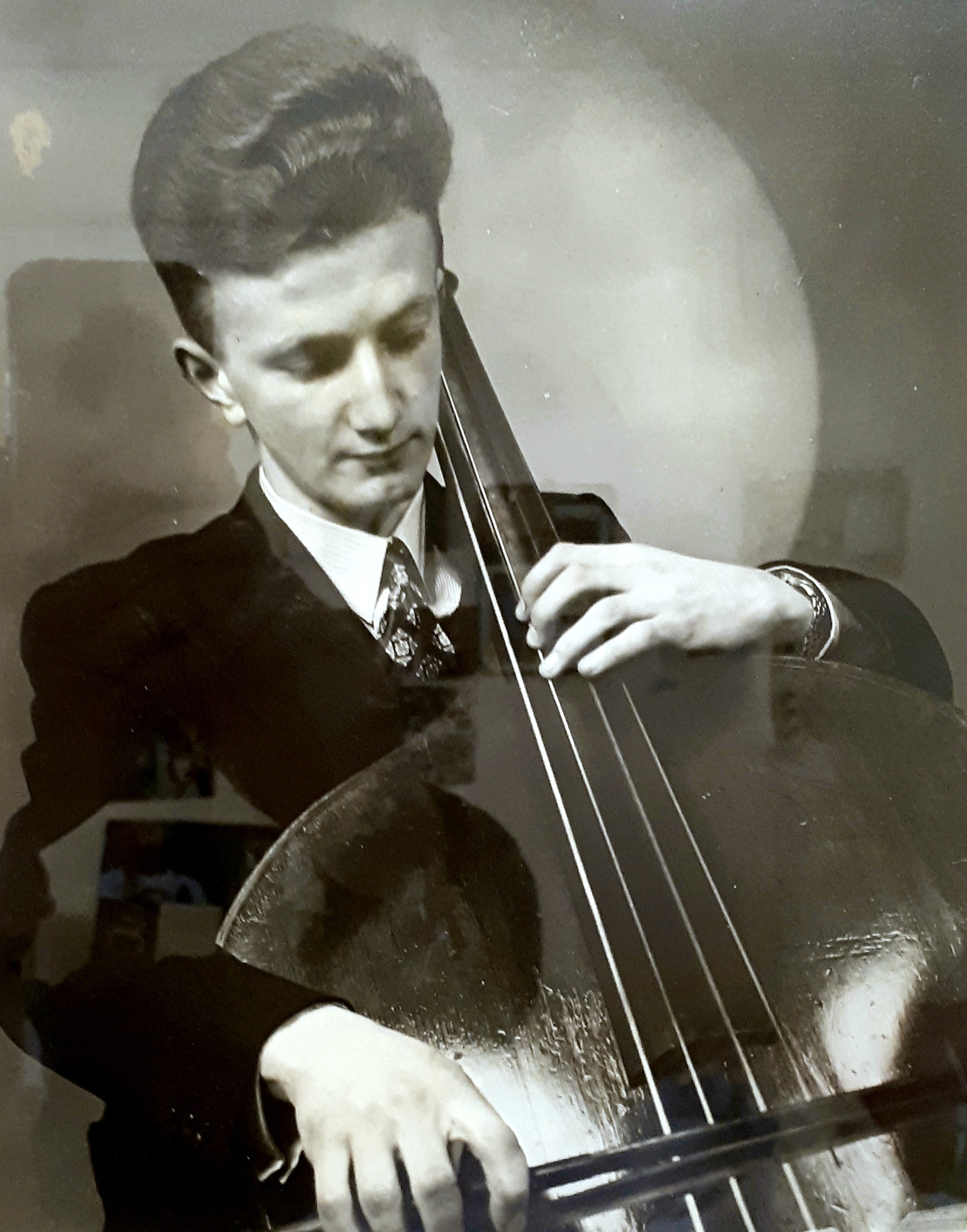 Gerald was born in Stockport in May 1932. He began studying the cello with my grandfather, Stuart Knussen Sr., Principal Cello of the Hallé Orchestra and in so doing became aware of my father, bassist Stuart Jr. and decided to move to the double bass. He became a pupil of Arthur Shaw, Principal Bass of the Hallé and very soon became a member of the National Youth Orchestra along with future principal bass players John Duffy (Hallé) and Bill Webster (London Philharmonic). By the age of 20 he himself had joined the Hallé and in 1956 my father offered him a place in his section at the BBC Symphony where Sir Malcolm Sargent was chief conductor. Also in the section were John Gray, Gerald Drucker and Maurice Neal along with Bob Norris and Juliet Cunningham. Within a couple of years Stuart Knussen moved to the LSO closely followed by John Gray. Gerald Drucker became Principal Bass and soon after principal conductor Rudolf Schwartz appointed Gerald Brinnen as Drucker’s co-principal.

On the formation of the New Philharmonia in 1964 Gerald Drucker became it’s first principal bass taking Maurice Neal with him. Brinnen auditioned and successfully won the Principal Bass seat at the BBC where he remained until his retirement in 1992 leading his section under chief conductors Antal Doráti, Colin Davis, Pierre Boulez, Gennady Rozhdestvensky, Sir John Pritchard and Andrew Davis.

Gerald Brinnen was completely absorbed by the double bass. He never married and had no immediate family. Nor did he have hobbies to speak of. The bass and the orchestra were his life. He was often a difficult and reclusive character. In the sixties he decided to change from the French to German style of bass bow and studied with Czech Philharmonic principal, Frantisek Posta with whom he remained friends until Posta’s death. For many years Brinnen would not appoint French bow players to his section but this relaxed in the early 1980s. I joined the BBC Symphony Orchestra in 1985 by which time the mainly young section was split 50/50 in bow technique. During this period until his retirement Gerald was clearly a victim of his own insecurities and hard to speak to. However, after his retirement and a few years of exchanging Christmas cards he invited me to his home for a meal and I discovered a completely different man. Warm and welcoming. A good cook and generous with his wines and gins. A man who would talk for hours wanting to know the professional gossip, to hear of my career development, and keen to tell me stories and anecdotes of a 40+ year career. I returned to his house every year for more food, drink and stories, later taking my wife Cath of whom he became very fond. Still surrounded by his instruments, bass related ornaments and photographs of conductors and musical heroes yet not having played a note since he left the BBC.

Sadly, Gerald suffered a series of strokes before a major one left him paralysed on one side in 2014. For the last five years he has been a resident in a lovely care home in Ashtead, Surrey where he has been well looked after. Despite his situation and an aging mind he often wanted to hear of players he had known and speak of his career. RIP Gerald.

« Concert hall is turned into courtroom for drug gang trial