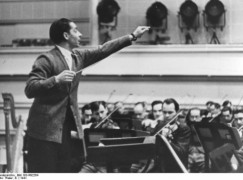 (1 How Beethoven wrote it here. 2 How the world changed it here. 3 How do you choose a Ninth here.)

Two conductors hold the centre ground of the German performing tradition in Beethoven’s Ninth. Wilhelm Furtwängler was chief conductor of the Berlin Philharmonic 1922-45 and again from 1952 to 1954, often also conducting the Vienna Philharmonic. His successor Herbert von Karajan headed the Berlin Philharmonic from 1955 to 1989, a period when he dominated the Salzburg Festival and the record industry. Each left around a dozen recordings  of the Ninth, some of them significant.

The pair were mortal enemies, their rivalry stoked first by Joseph Goebbels in Nazi Germany and later by the record industry. Yet they had more in common than met the casual eye. Both came from a professtional background. Furtwängler’s father was an eminent archaeologist of Ancient Greek. Karajan’s father, of Greek descent, was medical director of Salzburg’s state hospitals. Both conductors believed in the supremacy of German music and both recognised Beethoven as its apotheosis.

This is Karajan rehearsing Beethoven’s 9th, a strictly technical exrcise.

This is Furtwängler, bestowing the might blessing of German art on the blood-stained Nazi leadership:

Furtwängler perceived this symphony as a fusion of creative freedom and religious metaphor:
‘When, in the “Ninth”, Beethoven was drawn to the word, to the human voice, this was out of a need that had its origin in the preceding movements, that means, in the purely musical realm. The theme of this last movement as such was what brought with it everything that followed, the text, the human voice, the cyclical form. This very theme of all themes, a pure invention of a musician, could not be the interpretion or explanation of a certain text. Rather, the poem appears to be an explanation of the theme. And, therefore, the added human voice should thus be seen as the natural “instrumentation” of this eternal melody.

‘How the use of this “instrument”, the appearance of the human voice as such, however, is now musically motivated, in that can be seen the genius of Beethoven in all its greatness. Another composer would just simply have started the recitative and then the choral ending. With Beethoven, who only recognizes musical necessities within his work, this develops as follows: At first, the adagio appears to be virtually extended into eternity. He could not get enough of it, as if he could not finish it. The following instrumental recitatives thereby gain a peculiar expressivity and certainty. Already here one gets the impression that one is listening to the finale of all finales… This is the musical law of elevation by repetition — within the prescribed symmetry of a whole – exercised here in a grandiose manner.’

Grandiose is not quite the word to describe Furtwängler’s interpretations of the Ninth, which varied according to time and place. The most restrained, hesitant and least Furtwängler-like recording is a Berlin Philharmonic account in London’s Queen Hall on May 1, 1937, a venue soon to be flattened by German bombs. The electricity is as high as you’d expect in a Furtwängler concert but there is little to shock and surprise. This is a diplomatic engagement, maintaining appearances as the world contemplates a second apocalypse. There is something stentorian and almost martial about Rudolf Watzke’s over-loud cry of ‘Freude!’

Watzke was the watchman again in Furtwängler’s next recording at the Berlin Philharmonie in March 1942, but by now everything had changed. The world was at war, Germany was losing and all in the hall knew that their people were committing the most horrendous crime in history. From the symphony’s opening hush there is an intimation of imminent catastrophe. Furtwängler ratchets up the tension, allowing the listener a momentary illusion of familiarity before introducing a twist of expression that throws everything into primal uncertainty. There are passages in the first movement that remains terrifying at the tenth hearing. The ‘presto’ movement conveys a sense of destiny, the third movement reaches into bottomless tragedy and the finale withholds the assurance of hope. The performance was staged around a celebration of Adolf Hitler’s 53rd birthday. Some regard it as Furtwängler’s expression of distaste at the regime. This is a devious and dissident reading of the symphony, never imitated or equalled. It ranks with the all-time indispensable recordings. 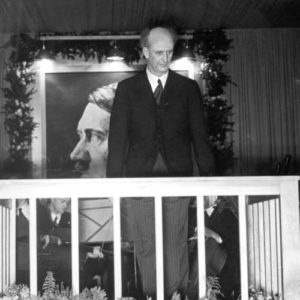 Subsequent Furtwängler performances in Stockholm (1943) and La Scala (1946) are nothing out of the ordinary, but three concerts in 1951 are epic. In January, he conducted the Vienna Philharmonic at the Musikverein, in July he re-inaugurated the Bayreuth Festival with an orchestra composed of the best musicians in Germany and in August he gave the closing performance of the Salzburg Festival. Each was a statement of his unique ability to make a work reflect the precise moment in which it is performed. The Adagio in his Bayreuth interpretation has an infusion of Wagnerian mystery, as if the composer himself had been mystically reincarnated in Furtwängler’s corporeal form.

One further recording commands attention. It is a visit of EMI’s Philharmonia Orchestra to the Lucerne Festival in August 1954 with Furtwängler and the cream of current soloists – Elisabeth Schwarzkopf (Soprano), Elsa Cavelti (Alto), Ernst Haefliger (Tenor), Otto Edelmann (Bass). Furtwängler is in phenomenal form, infuriatingly slow at the outset but raging at the opening of the finale as if to defy the heavens. Three months later he died in Baden-Baden, aged 68.

Daniel Barenboim, who played for him as a child, has written: ‘Wilhelm Furtwängler was always a stranger in this world. He was someone who went his own way and stood apart from the others: he could not be pigeonholed in any one category.’

Where Furtwängler varied in each performance, Karajan set a lifelong template in his 1947 Vienna recording with EMI’s Philharmonia recorded illegally while he was still under an Allied ban for his Nazi affiliation. Smooth, sleek almost dispassionate, his pinpoint control contrasts vividly with Furtwängler’s deliberate raggedness. One aims for inhuman perfection, the other is all-too-human. This performance is so imposing – with soloists Schwarzkopf, Elisabeth Höngen, Julius Patzak and the recital-like delicacy of Hans Hotter – that one is tempted to suggest that Karajan never bettered it. He did, however, by small incremental steps over four decades. Despite rapidly improving technlogy, for me the defining Karajan performance is the one that capped his first Beethoven cycle for Deutsche Grammophon in 1962. 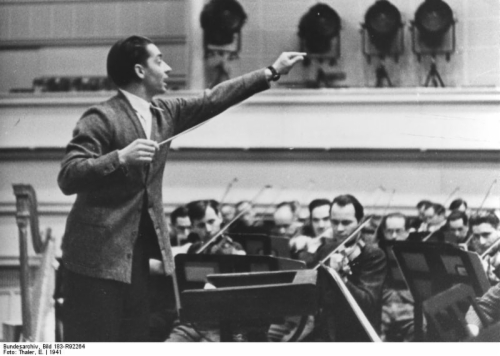 Produced by DG chief Elsa Schiller, who retired shortly afterwards, this performance was the emblem of West Germany’s post-War revival – a luxury reading of flawless magnificence, a Mercedes purring down the motorway. Joining the Berlin Philharmonic with the Vienna Opera chorus (Karajan was boss at the time of both) in the impeccable accoustic of the Jesus-Christ-Kirche, with soloists Gundula Janowitz, Hilde Rössel-Majdan, Waldemar Kmentt and Walter Berry, this was seen by Karajan himself as his signature achievement, a symphony that sold a million copies all over the world, demonstrating to culturati and novitiates alike the unsurpassable magnitude of German music. It is a summit of the art of recording, and of the imperviousness of music to moral values.