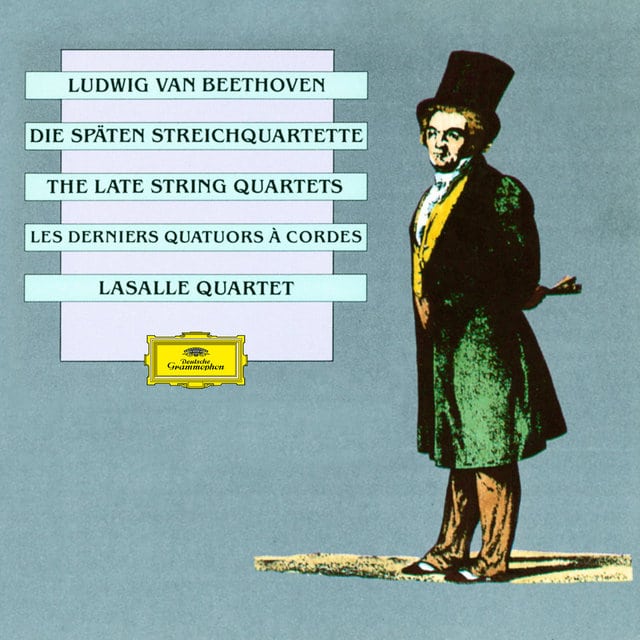 Beethoven: This one is a bit less unimaginative

Every superlative in the critical lexicon has been lavished on the opus 131. It is known as ‘the Everest of string quartets’. Also as Parnassus, pinnacle, inexhaustible and ineffable – ‘the most superhuman piece of music that Beethoven ever wrote.’ Beethoven himself places this work beyond the bounds of normality by writing seven movements, an unprecedented extravagance, and testing our emotional tolerance in every direction. By blowing apart the format established by Joseph Haydn, he leaves the listener not knowing what’s meant to come next.

The unanswerable question is, did Beethoven know? Did he have this structure in mind, or did he go from episode to episode not knowing where it might lead? When the publisher Schott asked for an explanation of the unwieldy manuscript, Beethoven replied that it was ‘zusammen gestohlen aus Verschiedenem, diesem und Jenem’ (put together from stolen odds and ends’). Believe that, if you like. Believe also, or not, a statement by the violinist Karl Holz that Beethoven thought this the greatest of his 16 string quartets – only to contradict himself immediately by saying ‘art demands of us that we must not stand still,’ a hint that he has greater things in preparation on his desk.

He is playing games, teasing his interlocutors. ‘Thank God there is less lack of imagination than ever before,’ he told the violinist Karl Holz.  Schubert, demanding to hear the work five days before his own death in November 1828, said: ‘After this, what is left for us to write?’

Although it was not much performed in the next few decades, this quartet attracted powerful commentaries, of which the most resonant came from Richard Wagner who, writing in 1870 for the centenary of Beethoven’s birth, aimed to establish Beethoven as a man who changed the world, his own personal precedessor. Wagner drew attention to the rough and raging finale, a passage which may have influenced his seaborne operas, The Flying Dutchman and Tristan and Isolde: ‘Tis the dance of the whole world itself: wild joy, the wail of pain, love’s transport, utmost bliss, grief, frenzy, riot, suffering, the lightning flickers, thunders growl: and above it the stupendous fiddler who bears and bounds it all, who leads it haughtily from whirlwind into whirlwind, to the brink of the abyss – he smiles at himself, for to him this sorcery was the merest play – and night beckons him. His day is done.’  Maybe he’s hearing Götterdämmerung.

Virginia Woolf used elements of this quartet in her novel The Waves. T S Eliot had both opus 131 and opus 132 in mind while writing his Four Quartets: ‘Time present and time past/Are both perhaps present in time future, /And time future contained in time past. /If all time is eternally present /All time is unredeemable.” Beethoven is reaching into the future, he intimates, to make sense of the present. Or vice versa.

Episode nine of the HBO series Why We Fight (2001) used the 6th movement to accompany footage of a devastated German town in the aftermath of Hitler’s death. Yaron Zilberman’s movie A Late Quartet (2012) featured a string quartet grappling with their own failing health and crumbling relationships through Beethoven’s opus 131. ‘What are we supposed to do,’ demands one of the players, ‘stop – or struggle?’

Latterly, American youth orchestras have fused the opening of opening of opus 131 with Kanye West’s hip—hop track ‘On Sight.

What these diverse and challenging resonances demonstrate is the extraordinary immediacy that this quartet has exerted from its inception,  while remaining as unfathomable in its essence as the Sphinx of Giza.

The first movement, which is slow, was described by Wagner as ‘the most melancholy sentiment in (the whole of) music’; others find it uplifting. Two dance movements follow, both verging on the macabre. The fourth movement, lasting 15 minutes and the pivot of the entire work, is a set of seven intricate and absorbing variations. The fifth movement is a two-minute runwaway horse, followed by another two minutes of profound self-contemplation before the finale rocks completely off the rails. For reasons that will soon become apparent, I will discuss the sixth movement in a separate post.

So where, across the history of recording and more than 50 different versions, do we find clarity and illumination? Both the 1932 sessions by the Hungarian Lener Quartet and the 1936 response from the exiled Busch Quartet demand serious attention, the Lener more questing, the Busch more certain. I am further intrigued by the 1944 Musikverein recording by Wolfgang Schneiderhahn and three fellow-Nazi members of the Vienna Philharmonic unfolding a sanitised performance in which beauty is the supreme value in a crumbling world. The beauty is, indeed, intoxicating. It is also the forerunner of a kind of post-War music making by certain Austrians in which beauty itself is an atonement for past crimes. Two of the Schneiderhahn players feature in the 1952 Barylli Quartet recording, an unnerving connection.

Finest of all the American performances is that of the LaSalle Quartet in 1977. Based in Cincinnati, far from the competitive pressures of New York, four Jewish refugees – Henry Meyer, Walter Levin (Violins), Peter Kamnitzer (Viola), Jack Kirstein (Cello) – backed into Beethoven in reverse, having first established their credentials as the world’s finest exponents of Schoenberg and the Second Vienna School. What they bring to this masterpiece, apart from superlative technique, is something of the T S Eliot sense of the fluidity of time, flitting back and forth between eras, informing the past with possibilities of the future. Each time I listen I learn something new, something I had missed before. I miss the high-minded ethos and utterly relaxed lifestyles that these four fine men brought to their art. I miss the world they inhabited. 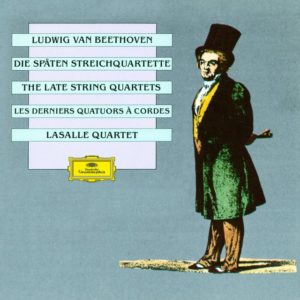 Of 21st century recordings, the Ebène Quartet are both elegant and athletic, the Cuarteto Casals are wonderfully wistful and the Emersons are simply excellent. The Quartetto Italiano have unforgettable phrasing in the finale, but I like the Takacs Quartet best for spice and fire and a sense of the joys and sorrows that are common to us all.

And we still haven’t got round to discussing the sixth movement. That’s coming up here.