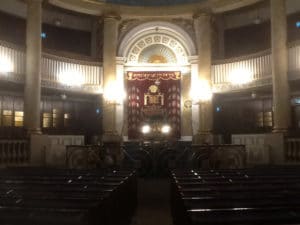 You can read part 1 here.

The sixth movement of Beethoven’s 14th string quartet opens, for reasons he never indicated and no-one else has explained, with the unmistakable musical phrase on Kol Nidrei that Ashkenazi Jews use to commence their Yom Kippur services.

Beethoven had contact with Jews through his life and was certainly not anti-semitic, but there is no record of him ever entering a synagogue or taking an interest in Jewish worship. How and why he quoted Kol Nidrei in his most important string quartet is a mystery we will never fathom, though it is worth examining the clues since the insertion is by no means insignificant.

Bonn, where Beethoven grew up, had a Jewish community from about the year 400. At the time of Beethoven’s birth, the Jews were locked away from the rest of the city inside a ghetto of 19 houses. A small synagogue had been erected in 1758 with room for 44 men and 29 women. After the French Revolution of 1789, Jews were allowed to live outside the ghetto. In 1794 Bonn was occupied by the French and Jews received full civic rights. By now, however, Beethoven was on his way to Vienna.

The Jewish population of Vienna in the 1790s numbered in the low hundreds and was confined to the second district, on the poorer side of the Danube canal. Under Austrian law, no Jewish community was recognised to exist in the capital, but those restrictions were dissipated by the French occupation in 1809. Fifteen years later an impressive temple was opened at Seitenstettengasse in the first district. There were still fewer than 2,000 Jews in the city but a handful of them had become wealthy and the synagogue could afford to employ eminent rabbis and a celebrated cantor, the composer Salomon Sulzer, who proved a singular attraction to musicians. Liszt was an admirer. Schubert accepted a commission to provide Hebrew Psalm settings for the Friday night service.

Beethoven, it has been suggested, was asked to compose a cantata for the synagogue’s inauguration but there is no known documentation of any such request. The year 1825, however, was when he was writing the 14th string quartet and it may be that an awareness of the consecration of the first Jewish synagogue in Vienna put him in mind of the Kol Nidrei prayer that opens the Yom Kippur services. This is about the strongest cause that can be argued for the presence of the tune in his seminal string quartet.

Kol Nidrei itself is problematic. The Aramaic prayer, originating in Iraq in the period 600-1000AD,  asks God to accept the annulment of the year’s unfulfilled personal pledges so that people can utter their Holy Day prayers with a clear conscience. Some authorities argue that the role of this prayer was to permit Jews who had been forcibly converted to Islam or Christianity to revert to their faith. Rabbis down the centuries have sought to abandon the prayer but tradition proved stronger than theology and, at some point in time, the prayer acquired a tune that was simply immutable.

The origin of this sighing melody, which is unknown, predates the 17th century. By the time of Sulzer and Beethoven it had acquired a patina of cantorial elaboration, almost of theatrical performance, and was among the best known melodies of the Ashkenazi Jews.

Later in the 19th century, Max Bruch would turn it into a successful cello concerto.

Beethoven cannot have heard it in 1825, when he was profoundly deaf. If he knew it at all it would have been from his youth in Bonn and if he consciously quoted it in the quartet it may have been as a nod of nostalgia to his younger self. A rumour that he had once fallen in love with a Jewish woman, Rachel Levin (better known by her married name Rachel Varnhagen) can be comprehensively dismissed.

The section of the 14th quartet that contains the Kol Nidrei theme is this:

One has to wonder whether Jewish players in string quartets have a different take on the Kol Nidrei theme than non-Jews. That would depend, in the first instance, whether they were familiar with Jewish liturgy in an age when many had been raised without religion. But we can’t know until we listen.

The Amadeus Quartet, comprising three non-religious Hitler refugees from Vienna and one London Jew, play the sixth movement as if unaware of any notion of Kol Nidrei. In the Juilliard Quartet’s version, played by New York Jews, the linkage is pronounced and unmistakable. The 1966 Fine Arts Quartet, of similar background, give an even more explicit emphasis. Most Jewish-sounding of all is the 1961 Budapest String Quartet, comprising Joseph Roisman, Jac Gorodetzky (Violins), Boris Kroyt (Viola), Mischa Schneider (Cello).

At the extreme far end of the ethnic spectrum the Nazified Schneiderhahn Quartet of Vienna in 1944 cleanse their intepretation not only of any Jewish association but of any hint of orientalism. Listening closely, it seems as if this is a conscious and deliberate artistic decision, so remote is their manner of expression from the mainstream of string quartets.

Turning to the post-war Quartetto Italiano, who were not Jewish, we find a phrasing that is almost Kol Nidrei, but not quite. The deep sigh is immensely evoctive not so much of Jewish experience but of Mediterranean civilisation, as if the tunes comes not necessarily from Judaism as from the intermingling of ideas that has flourished around the coasts of the Great Sea from the dawn of humanity. Perhaps that’s the heart of the matter, perhaps not. In musical terms, the Italiano are unarguably convincing.

« Arthur Rubinstein: I thought Paderewski would throw me out