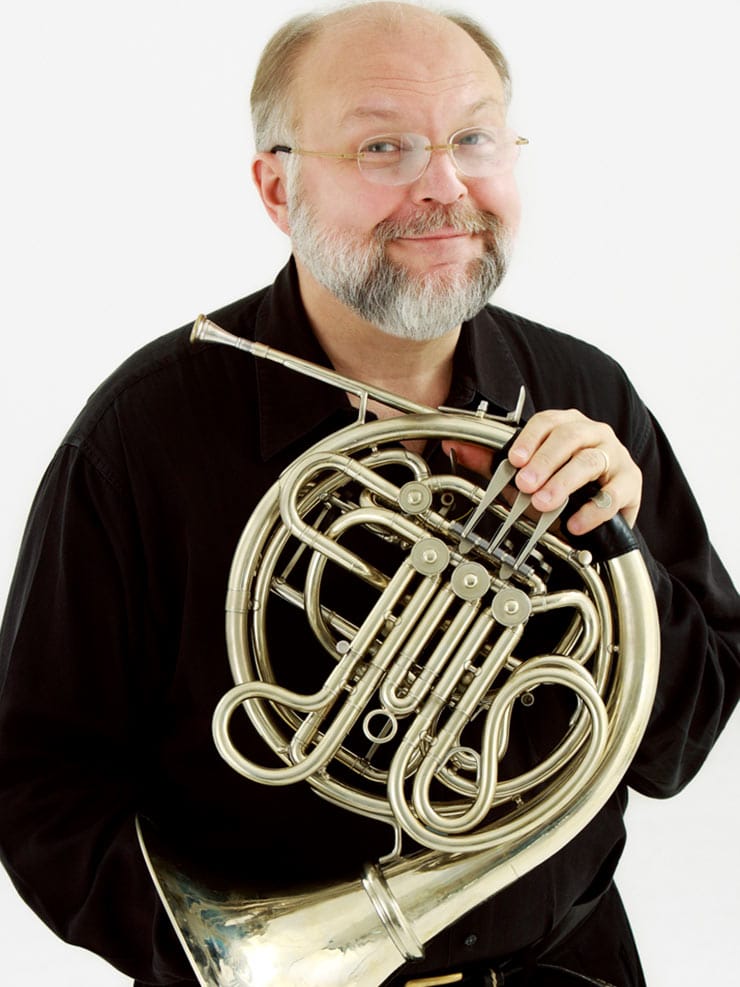 Joseph Anderer has announced his retirement from the Metropolitan after 36 years in the hot seat.

Here’s what he writes on the Met musicians’ page:

When I was about 10 or 11, not long after my dad died, my mom woke me up one morning- she had decided that (largely because we had a piano), I should take piano lessons. I think I may have been upset at first about that, but I did it- there was an old Cossack in our neighborhood who taught piano, and I went to him for lessons. He was a very colorful character for our neighborhood, but I did all the basic stuff, Hanon, etc., and I may have started to enjoy it (sort of, but not the Hanon stuff!). Anyway, there was this guy who had his lesson before me- I couldn’t see him, but I could hear that he was a monster on the piano, and he caught my ear in a sort of primal way, I suppose. I later learned who he was, this tall dude named Leon Bates, who went on to an excellent career- I heard him play a concerto with the Queens Symphony when my wife played there and my friend was conducting, and I have other friends who toured with him playing chamber music. I very belatedly take my hat off to him, probably my first inspiring musical figure!

Then I went to high school, where I discovered that there isn’t a piano in the band ☹. They made me pick out an instrument, and I really wanted to be in the band by then. My first choice was the clarinet (my wife finds that amusing for some reason), but #2 was the horn, and when they found that out, they grabbed me by the ear and took me to be examined by the horn teacher, who looked at my teeth and said I’d probably be OK. They sent me home with a horn, and I started fooling around with it.

Now I MUST tell you a bit about my teacher, Giacinto Vitacolonna, who was in his upper 70’s at the time- in his youth he had studied with Anton Horner (Philly Orchestra principal, and teacher and “godfather” to a whole generation of the greatest East-coast American players). Vitacolonna had played in the Sousa Band in his early days, and he had been 1st horn at the Aldine, a silent movie theater- at the time, it was a higher-paying job, with more weeks of work, than the Philadelphia Orchestra- he told me he had turned down a job offer from them! He also got to choose from the first shipment of Horner-model Kruspe horns after World War I. I think he played quite a lot with the Philly Orch as an extra- he told me stories about Mengelberg and Strauss. And HE was my first teacher!

At St Joe’s Prep (my high school), we had a lot of great instrumental teachers- several were retired long-time Philly Orch members, etc. My first band director was none other than the very young Bill McGlaughlin, still earning a degree at Temple U, but already subbing with the Philly Orch as a trombonist. You may know him as the former host of “St. Paul Sunday”, or currently (for many years now) ‘Exploring Music”, syndicated all over the USA. A great mentor!

Bill got a job with the Pittsburgh Symphony as a trombonist, and was later the Music Director of several orchestras including the Kansas City Philharmonic, all the while pursuing his other career in radio. Our next director was Bob Fitzpatrick, also earning a degree at Temple, and later the Dean of Curtis Institute. In the years that followed I played a lot of chamber music with him, and also a couple of concerti after he started conducting various orchestras in the area. I was a very lucky little fucker, and I progressed well on the horn with such great guidance.

My mentors also sent me up to Symphony Club (actually quite close my home), which was a community orchestra, but with an old and deep long-term connection to the Fleisher Collection, then (maybe still) the largest collection of orchestral music in the world. They say that Stokie would do recruiting there when he was the Music Director of the Philly Orchestra, back in the day. We read a different complete symphonic program every Thursday night! That’s where I learned to sight-read, and also to transpose horn parts. Arthur Cohn was the conductor, (he ran a music publishing company and was a former director of the Fleisher Collection), a tough-as nails New Yorker (I aspired to that, too!). He didn’t generally stop for anybody or anything, so we all had to keep our wits about us! I once missed a subito piano in a Beethoven symphony (and we all know how important those are in Beethoven’s language), and boy did I hear about that! He knew I wanted to be a musician, unlike most of the other amateurs, so he was a bit tougher on me! Many years later, I heard an LP of Dvorak’s Symphony #5 (the real #5, not the “New World”) for the first time, but I thought “this piece seems SO familiar!”- I found a list of Symphony Club programs from that time, and damn if I hadn’t already played that piece, but ONLY on that one Thursday night! What great training for the price of a trolley ride!

I got great encouragement from these various musicians in my life, and I got more and more serious about pursuing music as a career. I decided to audition for several great schools, including Juilliard, and I was accepted there, by the skin of my teeth, as I saw it! I had other opportunities with more financial assistance, but I thought, having only been a hornplayer for about 3 ½ years, I really needed to be in a “pressure cooker” environment, and I felt very committed to that. I think I made a very good decision to borrow money and go to NY. My teacher there was Ranier DeIntinis, also the teacher of Erik Ralske, my partner in the Met principal game. He also taught my dear friend Jeff Lang, whom I met when he was still in high school- he’s now associate principal horn in Philly

At Juilliard I was in James Chamber’s orchestra rep class, although I never studied horn with him. One day I got a call from the NY Phil, where he was the personnel manager- one of the guys was sick- could I come over and sub for him in a performance that night?- it was “The Planets”, with Maestro Bernstein! I ran over to their library, got the part, and woodshedded that damn thing for the entire afternoon! The concert seemed to go pretty well for me, and I also got to play a recording session the next morning. Around that time they had to revise their sub list- one guy had joined the orchestra, another had left NY, and so on. Somehow, I ended up in the #3 spot on their list that spring (I was still an undergraduate then). If you find yourself in the first 3 on the list, it means you get called for ALL of the Mahler, Bruckner and Strauss pieces with 8 horns, also Varese (well, after Boulez showed up, anyway) 😉. I managed to stay on that list for 14 years as a freelance player, toured all over the world with them, and what a great experience all that was!

I was a very happy and VERY busy freelancer, and I didn’t feel I had time to prepare an audition recording when the Met 1st horn audition came up in 1984. I didn’t even send in a letter, but I had worked with several of the Met guys, and at least one of them told me I was NUTS not to take the audition! One day, I received a letter telling me that I had been passed out of the “tape” round (never having applied for the position!), and I was invited to the live prelims. You can imagine how I felt, but THEN a while I got a call asking me to be the interim principal for the 84-85 season!!

I decided then that I should probably take this whole audition thing seriously, and I worked my buns off that summer. I even ALMOST won the audition (I was runner-up to Julie Landsman). It was all an amazing experience, and at the end of that year, former principal Dick Moore decided to retire (he was my wife’s teacher, and we became good friends during that year). That spring, I went off on tour with the NY Phil, having heard that I was being considered to replace Dick, but fully expecting to go back to my freelance life, with a quintet I dearly loved, and things like Broadway and other gigs, which I saw as supporting my “quintet habit” (my quintet had a saying when we were offered a concert, “If you have to ask what it pays, you can’t afford to do it”). I had also been a member of St. Luke’s Chamber Ensemble (and later on the Orchestra of St. Luke’s) already for 10 years at that time- they’re still my real musical “family”.

As it turns out, a “tour buddy” of mine (who was married to a member of the Met orchestra) saw me at breakfast in Berlin, called me over an told me that I HAD to call the Met right away so they could hire me- the story of that day is so zany- trying to make a collect call on a German pay phone (impossible at that time), administrators letting me into Zubin Mehta’s dressing room to use his phone after he went to the stage (I got the bosses’ answering machine), and I finally called from Berlin hornist Klaus Wallendorf’s house late that night (we were going to Dresden the next day, and it was still EAST GERMANY back then!)-that call just HAD to happen, and it DID, on that night 35 years ago!

To make a very long story a tiny bit shorter, I guess you could say I lived happily ever after, with the greatest group of musicians and colleagues in the world. I moved back to the principal chair in 2003, at first on a one-year basis. After season which included Tristan, the Ring cycle, Italiana and other such ditties, plus a concert series that concluded with Mahler’s 9th, I was given the principal chair with tremendous support from my colleagues and my “bosses”.

I have enjoyed all of this thoroughly, but a year ago I discovered that I was the oldest principal in the orchestra, and also I figured out that nobody my age (as far as I know, in the entire world), was still doing the kind of schedule the Met Orchestra does (well, that was THEN… ☹). Besides, there’s something quite perverse, if not outright WRONG, about the horn-player being the oldest principal, in my humble opinion! I thought it wise to say “enough”, even though it really wasn’t enough for me, and I’ll miss it so much… I’m very grateful for all of this and also for many experiences I haven’t included here, but only a serious nerd would still be reading this, and if you’re still here, thanks so much for your patience!”