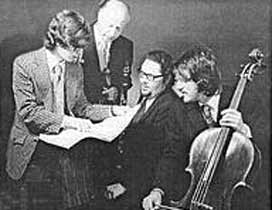 Joe joined the Met in 1980 from the Israel Philharmonic, and retired in 2003. He died following heart surgery. He was 81.

From Joffe Woodwinds: Joe Rabbai was a longtime friend, teach and colleague and someone who I dearly loved. He passed away this morning as a result of complications from heart surgery. Joe had a magnificent career as the principal clarinetist of the Metropolitan Opera Orchestra, the Mostly Mozart Orchestra, the American Symphony Orchestra, among others as well as a well respected chamber player. He was a musician who cared about every note and phrase he played, whether at a rehearsal or concert. He loved sharing his knowledge as a teacher and represented the finest example of “old school” as a player and a gentleman.