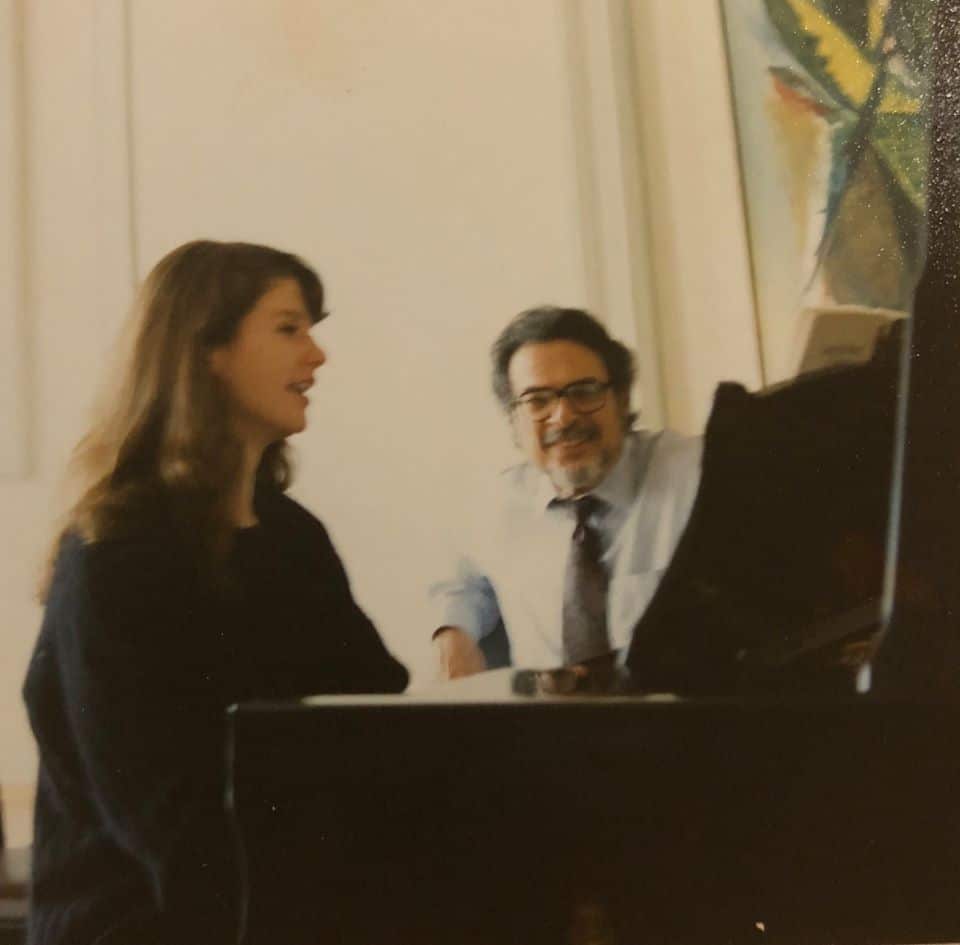 Forget the hand, Leon Fleisher was concerned with your mind

Chicago pianist Lori Kaufman shares her experience of what made Leon Fleisher the most influential piano thinker of our time:

In the assortment of obituaries published online and in print this week, writers spent most of their time describing a pianist who overcame the devastating difficulty of losing the ability to play with his right hand, and the treatments he endured to remedy, and ultimately, transcend that. But what most cannot define is the massive contribution Leon Fleisher made to piano playing, and why he should be remembered as a two-handed pianist, far more than as a one-handed humanist. Yes, he reinvented himself in the most poetic way possible, yes his life story is a formidable example of human triumph, but we cannot forget what he accomplished IN ADDITION to all of that. The impact he had on almost a century of pianists everywhere was universal and indelible, but what makes his departure such a hole too big ever to fill?

In all discussions of Leon Fleisher the teacher, there is a certain mystery and surrounding just what made him so revered by his students. Nobody outside of Room 413 at Peabody really knows what happened inside of Room 413 (now renamed Room 411C). The myths (he will talk about the cosmos!) and inaccuracies (he is not warm with his students!) went around and around so when you first show up, you have no idea of what to expect and are even shocked that he remembers you from the audition.

Most of what people think they know about Mr Fleisher is either wrong or cannot be easily explained. The way I used to analyze it, is that most teachers give you the finishing touches on a piece, they clean it up and spit on a rag and polish it to a sheen so you can put it in your pocket and on your list of rep. Leon, however, did not give you the finishing touches, he gave you the beginning touches. He got you to stop playing and start thinking, thinking about how to approach the piece from the inside out. A recalcitrant Jew, Mr Fleisher was always delighted by any kabbalistic reference so I will mention one that we spoke about: The first book of Genesis is usually translated as “In the beginning…” but the Hebrew word B’reishit actually means something like “In the midst of the beginningness of the beginning times before time had even started..” and that mystical beginningness was exactly the place where Leon the musician spent his life, and exactly the exercise that Fleisher the teacher demanded of his disciples.

What was the composer thinking as he methodically put these enigmatic dots on paper, what was the direction, weight, texture, energy, impetus, color, of each note, where was the note going, what had this note seen, who had this note loved and lost, what would give this note its ultimate redemption, what was the space between each beat, how must we give the impression of elongating that space, or contracting that space, or bridging that space, or multiplying that space, endlessly stretching a silken thread from the first note to the last, creating world upon world until, as in Genesis, finally, And There Was Light and God said It Was Good, so that one’s entire performance felt to the audience like each hair on their heads were being pulled, inexorably, (one of his favorite words) toward the stage.

One of the most misunderstood rumors about Mr Fleisher is that he never demonstrated while teaching. Yes, he had two old battered Steinways alongside one another and we would all sit in a ragged circle, nestled against the pianos yet simultaneously afraid to touch them, and yet he never had a student sit at one and he at another, UNLESS, we got lucky enough to play a concerto on a rare day where he bestowed the ultimate gift of playing the orchestra part. (!) Unlike most teachers, who play a passage and then ask the student to copy them, he had a very different and unusual approach: If he wanted to show how the music should be played, he would amble over and sit right next to you, position his left hand on the high soprano register, and place your right arm snugly on top of his left arm and then play (yes, with his left hand he could play any right hand part in any piece). So instead of listening and copying, we were taken on a magical ride to FEEL what it felt like to crawl right inside the center of this music he loved so much. Normally, the handicapped person would be carried through by the able person, reliving an experience through touch and imagination. No, in reality, WE were the handicapped, who rode on his arm like a magic carpet, zooming to the outer worlds where gravity doesn’t exist and the air gets so thin you can hardly breathe. But what was it that he could do on the piano that NONE of us could ever replicate on our own?

For the answer to that, fortunately, we have some evidence. And an accomplice. When George Szell met Leon Fleisher in the mid 1940’s, it was the start of one of the greatest artistic collaborations the world has ever known. In the young Fleisher, Szell met his match. He finally found a pianist who could make his ten fingers sound as clear and defined and energetic and driven as he made the instruments sound in his orchestra. These concertos succeed so brilliantly because there is no soloist and an orchestra, there is the greatest orchestra in the world made BETTER by adding ten miraculous instruments. Everybody has had the experience of listening to Szell conduct a piece and suddenly hearing every single instrument clearly speaking as if directly into your own ear, and yet playing together with an indivisible precision. It is the ultimate sleight of hand, at once we hear the whole greater than its parts, and the parts greater than the whole — the performance literally an open book, the composer’s score in blazing black and white. This was the embodiment of Fleisher’s catchphrase “support the composer” – everything you do must be in service to transmit each black dot the way it was intended to be heard, but alas, so few people can actually do it.

In Szell’s orchestra, Fleisher heard the ideal that he already had in his own mind. But with Fleisher, Szell got something even better – someone who could actually do, effortlessly, with his two hands what Szell heard in HIS own mind. Fleisher’s supreme talent was that he had the rare ability to make every single note of any piece come alive with blinding clarity. If you listen to Rachmaninoff’s Paganini Variations, for example, the piano starts out as though it’s just one more instrument in Szell’s magisterial ensemble, the incisive melody blending in perfectly. Before you notice, the piano gets more and more significant, and when the individual solo interludes explode out of the string and wind sound, it sounds as organic and inexorable as a tsunami, and yet a tsunami where every individual drop of water is visible! Szell and Fleisher reinvented the soloist/ accompanist paradigm COMPLETELY. Take Mozart K. 503: Listen carefully to Fleisher’s Alberti bass, and instead of a series of four equal, rather repetitive eighth notes, you will hear each note with a different shape, sound, texture, all perfectly balanced and yet striving in completely different directions. In those simple musical gestures you will hear Papageno looking for his Papagena, Count Almaviva misbehaving, Figaro courting Susanna, Guglielmo plotting, Don Giovanni causing drama, all of Mozart’s characters flashing by in a few measures, and yet, instead of chaos, it’s harmony and humanity and humility.

Szell must have been gobsmacked to finally meet someone who could do with his ten fingers what the conductor could do with a whole orchestra – make every note of every part sing out so clearly that no audience would be able to resist.

And that is why, even after sixty years, his Beethoven and Brahms concerto recordings (as well as the above mentioned) have not been surpassed, and never will be. Thus, the testament he leaves us is what he did with his two hands. We can and should talk about Leon Fleisher’s incredible triumph over the handicap that threatened his existence, but let’s not let that be the headline. As impressive and laudable as that is, what he accomplished with two hands, and the lessons we received in Room 413, from one of the greatest pianists who has ever graced our planet, are so much more than that. 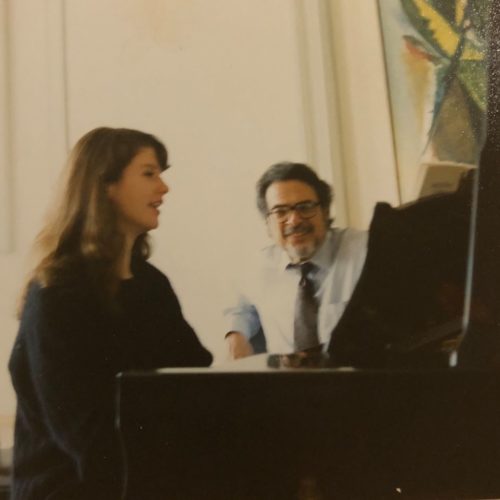