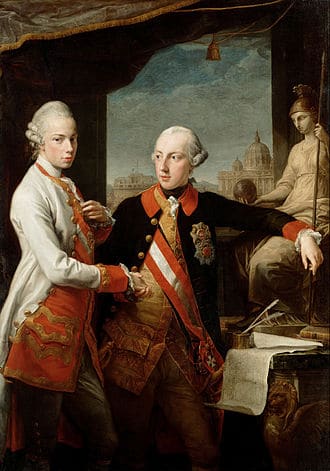 Did Beethoven take the knee?

Beethoven: Cantatas on the death of Emperor Joseph II (WoO88) and on the accession of Leopold II, WoO89 (1790)

Beethoven advocated human brotherhood and hated tyranny. This has led many to assume that the composer lived in a state of hostility with the hereditary powers that governed Europe in his time. Nothing could be further from the truth. Beethoven did not hate the aristocracy; on the contrary, he wanted to be part of it. There is evidence showing that, in the custody battle for his nephew, he claimed to be himself of noble birth, arguing before a Viennese judge on December 11, 1818 that the ‘van’ in his surname was the Dutch equivalent of the German ‘von’ and that he was decended from the ruling classes and therefore a fit and proper person to be trusted with bringing up an unruly boy. On another occasion, he declared loudly ‘I, too, am a King!’

Beethoven was not an egalitarian. He grew up in the court of the Archbishop-Elector of Bonn, where his father was a tenor in the chapel. The Elector, Maximilian Franz, was a brother of the Austrian Emperor Joseph II, head of the Holy Roman Empire. At 13 years old Beethoven went into service for a couple of years as deputy organist in the Elector’s chapel. He learned to bend the knee, doff his cap and act in every way deferentially towards the ruling classes, knowing that they held all of the keys to his success and, indeed, survival.

When he came to Vienna he obtained introductions to young aristocrats, men his own age, who would sponsor his composing career by paying his living expenses. Prince Karl von Lichnowsky offered him 600 guilders a year, a stipend that continued until 1806 when Beethoven refused a summons to play for the Prince’s guests, a group of French officers.

Others who helped Beethoven financially were Count Ferdinand Waldstein, the Russian Ambassador Prince Andre Razumovsky and the Emperor Leopold’s youngest son Archduke Rudolph. It was not just money he needed but palaces and guest lists for his concerts and a good buffet afterwards. All these worthies got their names perpetuated in his scores. Rudolph, who was his long-term student, received no fewer than 14 dedications. In 1809 Rudolph organised a cartel of aristocrats to pay Beethoven a salary until Napoleon’s entry into Vienna caused a mass flight of bluebloods. Later, Rudolph ordered a piece from Beethoven for enthronement as archbishop of Olmütz, a work that became known as the Missa Solemnis . Genius that he was, Beethoven could not afford to affront the aristocracy. He was every bit as servile as the capricious and self-destructive Mozart, and perhaps more so. That said, he never courted royal patronage. Nor did he intrigue with or against the court composer Antonio Salieri in order to catch the Emperor’s ear. Early on, he took counterpoint lessons from Salieri; afterwards, he maintained a distant collegial relationship with him.

The only works that connect him to the ruling dynasty are two that he wrote in Bonn when he was 19 years old, and which were never performed. The first cantata mourned the death of Emperor Joseph II, aged 48, in February 1790. Joseph Haydn is said to have read the score and given his approval; it could easily be mistaken for something he wrote, ticking all the boxes for a solemn occasion. No-one knows exactly why it was never performed but the wind players are supposed to have found their parts too difficult and the young Beethoven was not prepared to compromise.

The score was found in Vienna among Beethoven’s legacy in November 1884 and given a respectable premiere. It is a mature simulation of official solemnity with very little by way of Beethoven’s personal style. The opening and closing choruses, ‘Todt! Todt, stöhnt es durch die öde Nacht (death, groan through the barren night)’ are impressive not so much for any originality as for the absence of strong emotion.

The second cantata, celebrating Leopold’s coronation, presents his calling card to the new regime. It’s heroic, flattering, drearily competent. It does not sound like Beethoven was trying very hard and it’s not surprising that neither of these cantatas is frequently performed.

The earliest recording of the Joseph cantata, conducted in 1950 Vienna by Clemens Krauss, leads the field with delicious wind solos from the Vienna Symphony Orchestra. The chorus is flawless and vocalists Ilona Steingruber and Alfred Poell excellent. Among a half-dozen recordings, Christian Thielemann’s 1997 attempt at the Deutsche Oper Berlin is  easily the weightiest.

There are even fewer recordings of the Leopold cantata with Thielemann, at the head of a limited field, making the finale sound like a dry run for the Missa Solemnis. Two 2020 recordings by the Finnish conductor Leif Segerstam with theTurku Philharmonic Orchestra are well turned out and free of presumption. Segerstam is a lusty character, unmistakable for his mountainous girth, amazonian beard and general absence of decorum. His lack of social niceties has a certain Beethovenian aptitude and his musicality is profound. His Naxos recordings make an urgent case for these half-hearted scores that the young Beethoven coughed up to the men in power.

I would turn first to Segerstam again in this ‘Sacrificial Song’ that Beethoven tinkered with intermittently from 1794 to 1825 without ever being satisfied with the final result. Reminiscent in its airy way of the Priest’s Chorus in Mozart’s Magic Flute, it lasts barely five minutes and has a lovely soprano part (sung here by Johanna Lehesvuori). Other recordings attempted by Michael Tilson Thomas, Marcus Bosch and Matthew Best are no better than adequate. The closing words ‘Das Schöne zu dem Guten! (the beautiful to the good)’ is a favourite slogan of Beethoven’s a kind of self-entitlement.

Tremate, opus 116 (1801)
A Mozartian terzetto for three voices and orchestra, Tremate is hardly ever heard in concert and scarcely recorded. Aside from a decent effort by Segerstam and his Turku crew, there’s some serenely operatic singing on Arthur Apelt’s 1971 recording with the Staatskapelle Berlin and soloists Hanne-Lore Kuhse, Eberhard Büchner and Siegfried Vogel. A 2020 production by the Beethoven Philharmonie with Condcutor Thomas Rösner does not match the quality of the ensemble that Berlin could assemble half a century ago.