Today’s orchestral release from Warner Classics comes on a device that sound professionals have taken to calling ‘an inverted dustbin’.

That’s one of the politer epithets for the Echo Studio Device. ‘Amazon Buckethead’ is more the common nickname. We thought you should know.

“Our aim has been to ensure that each track has the edge of live performance…to create the electrifying sensation of living inside the music.”

Dolby Atmos Music gives music more space and freedom, revealing what was lost with stereo recording. Thanks to this immersive audio technology developed by Dolby, listeners can experience the works of 26 supreme composers as if they were in the concert hall sitting alongside the London Philharmonic. Dolby Atmos will envelop listeners in sound, offering a truly immersive listening experience.

To experience the 3D Classical Collection in Dolby Atmos on Amazon Music, listeners will need a subscription to Amazon Music’s high quality streaming tier, Amazon Music HD, as well as Amazon’s latest groundbreaking high-fidelity smart speaker, the Echo Studio. With Amazon Music HD, customers have access to the highest quality listening experience available, including a growing catalog of 3D Audio, as well as more than 60 million songs available in High Definition (HD) and millions of songs in Ultra HD. When paired with an Echo Studio, customers will experience immersive audio, which brings listeners closer to their favorite artists and songs, allowing them to experience music the way artists intended it. With five built-in directional speakers, Echo Studio has been purposefully engineered to create premium sound with space, clarity, and depth.

Each of the 35 tracks is set in a soundscape attuned to the specific colours and moods of the music, which is best experienced on Amazon Music HD with Echo Studio The music in the 3D Classical Collection spans four centuries, ranging from Bach, Handel and Vivaldi through Mozart, Beethoven, Tchaikovsky, Wagner and Verdi to Mahler, Elgar, Ravel, Prokofiev, Holst, Shostakovich and Barber. It encompasses moods from the intimate to the epic, the serene to the cataclysmic, the reflective to the rousing…. 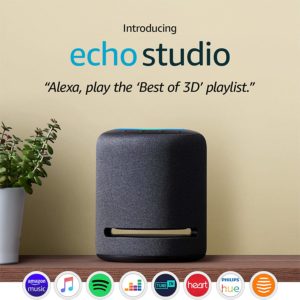