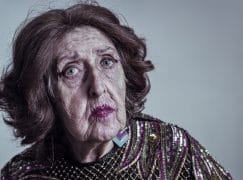 Sadness: Ida Haendel is no more

Ida Haendel, last of the golden age violinists, died yesterday at the age of 91. Or maybe 92 or 94. She once showed me three different birth certificates. They were not very accurate in Poland, she said.

We were friends, for a very long time.

A student of Carl Flesch in 1930s London, she became the outstanding interpreter of the Sibelius and Walton concertos, among much else. Her playing was almost masculine in its strength and virility – she was proud of that – and colourful in all ways. She shopped for her concert frocks with great care and once took me along to observe.

Neither married nor ever in a stable relationship, she had a romantic fixation on the conductor Sergiu Celibidache, and one or two others. Among other violinists, she revered Heifetz, and not many more.

Her last years, lonely in Florida, were miserable.

She had a series of dogs called Decca, after her principal record label.

UPDATE: Ida as her family knew her

« Helen Mirren: My father played viola in the London Philharmonic