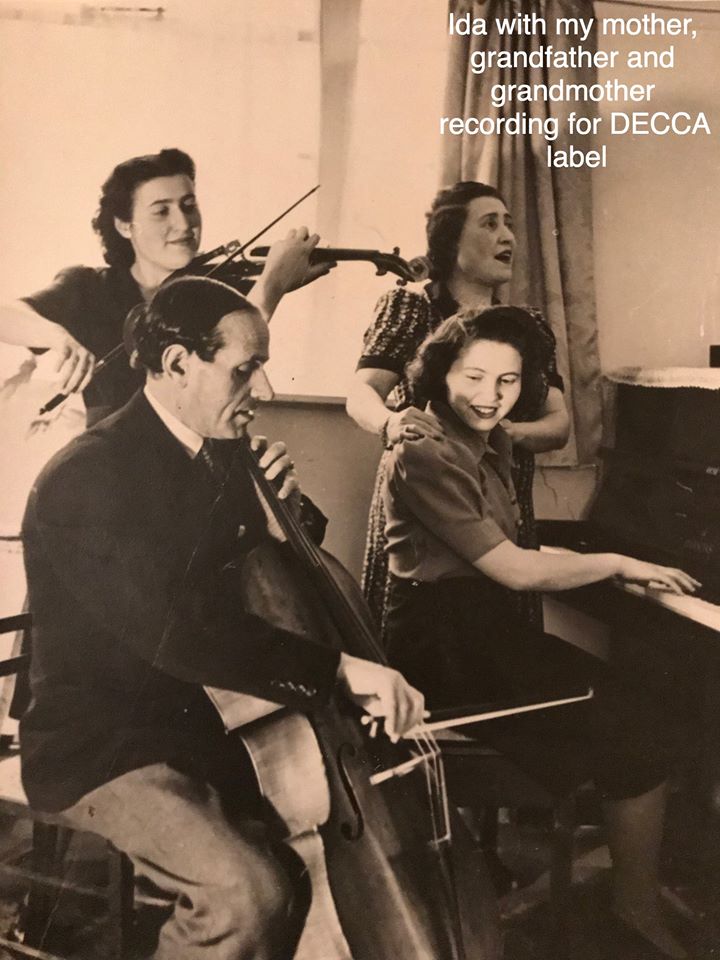 Ida Haendel, as her family knew her

A message from her Canadian nephews, Richard and Corey Grunberg:

It is with heavy heart that I let my Facebook friends and family know that my beloved aunt, the legendary and world renown violinist Ida Haendel, passed away peacefully last night at her home in Miami.

Aside from the fact that she is the one that kept my family alive during the war (it was because of her being a child prodigy they were taken out of Poland by the British government) I have so many fond memories of her…She was a wonderful aunt to me and I looked upon her as mom #2, as her constant travel schedule left her no time for a family of her own. She took me on tour with her on my first trip to Asia (I carried her Stradivarius violin which she never entrusted to anyone else). She got me interested in my future career, watching CBC and the BBC film documentaries on her life, and got me my first audio job, helping to remaster old opera albums at EMI/ ABBY Road studios in London (where I also got to hold and listen to the master tapes of the Beatles White Album). Our yearly trips to Lake George, Lake Placid and Florida were wonderful, and going to her concerts, listening to her play with such extraordinary grace and ability were a regular part of my childhood.

I was so proud when I accompanied her to a concert in Tokyo, and I noted that the violinist at points played Sibelius off key..she turned to me and said “oh my…you caught that…you have an ear for music”. I let her know that after hearing her play so flawlessly for so long, how could I miss the errors.

Though living far away from me, it was my pleasure and honour to take care of her to the best of my abilities (and thank god to her best Friend Ana Vergel, for always being there for her in Miami) the last few years of her life – so a bit about that life if you are interested:
Polish born, a proud British subject and Canadian citizen, U.S. resident, Israeli benefactor, prominent global citizen and child prodigy, my aunt made a significant mark upon the world of music, and the lives of those she has touched with her endearing personality and brilliance in so many spheres. At a time when few if any female musical talents mastered the airwaves and drew major audiences, Ida Haendel was a pioneer. Her ability to fluently and emotionally converse in eight languages, astounding contributions to arts, culture, society in general, her legendary solo international performances and YouTube videos, has made her a noteworthy and celebrated representative of societal ethos, kindness, and talent, she has well earned the title of ‘Grand Dame of the Violin’ as one of the world’s greatest violinists.

Wherever Ms. Haendel played; The composer, her fans and fellow musicians adored her musical brilliance, dedication to her art, and to helping the international community in any way she could. She has been headlined in articles around the globe by such labels as one of; “The Great Women Artists Who Shaped Music”, “Legendary Violinists”, “An Icon for Young violinists”, “The finest violinists of the 20th century” and “is still amazing at age 81”. Legendary conductor Zubin Mehta was in awe of her expressing “an artist who thought out every single note”, and upon hearing Ms. Haendel play one of his compositions, Sibelius himself sent her a note saying “I congratulate you on the great success, but most of all I congratulate myself, that my concerto has found an interpreter of your rare standard.” and she was considered “one of the most enduring idols of the concert platform”.

Her accomplishments and the accolades and honours afforded her are too many to list in one letter, however her history is a testament to someone who has dedicated her life to others and the world of music.

At 4 years of age, she began formal studies with Miecyzslaw Michalowicz at the Warsaw Conservatory, where she won its gold medal in 1933, the First Prize at B. Huberman Competition in Warsaw, and in 1935 was one of the laureates of the 1st International Henryk Wieniawski Violin Competition in Warsaw.

In 1936 Ms. Hendel settled in London, saving her family from the war in Poland, and a short time later, in 1937, she made her London debut at the Queen’s Hall with the celebrated conductor Henry Wood and subsequently made regular appearances at his Promenade concerts.
In 1940 Ms. Haendel became a naturalized British subject, and an exclusive Decca recording artist, one of the first classical artists in the company’s history. She has since recorded for some of the other great labels in the world, including Harmonia Mundi, and EMI CLASSICS.

She performed regularly as soloist with legendary maestros including Zubin Mehta (Israel Philharmonic Orchestra), Paavo Berglund (Finnish Radio Orchestra), Gennadi Rozhdestvensky (London Symphony Orchestra), Charles Dutoit (Montreal Symphony Orchestra) and the Romanian conductor Sergiu Celibidache, a relationship that endured for thirty- five years.
In 1970 she published her autobiography “Woman with Violin”. Additionally, between the period of 1986 and 2006, Ms. Haendel sat on the jury of the International Henryk Wieniawski Violin Competition in Poznań. Ida Haendel plays a rare 1696 Stradivari violin which was revealed in her book was “as precious to me as a limb. I had found my ‘mate’ in this beautiful instrument made in 1699, which I use to this day”.

In 1952 Ms. Haendel moved with her father and mother to Montreal, Canada, to be with her sister Alice and family for many years.
As the first western soloist to be invited to perform there after the cultural revolution, Ms. Haendel played in China in the spring of 1973, just one of many cultural exchange contributions she has made to the world beyond her music.

In 1979, as Ms. Haendel’s father was aging, the family began spending most of their time in Miami, Florida with her dog Decca (named after her first record label). Ms. Haendel made considerable efforts to shape the growing classical music community in Miami, with many concerts and performances she played in, and many organized to her credit and in her honour. https://www.nws.edu/events- tickets/concerts/miami-music-festival-honors-ida-haendel/

Among her many honours she received the Sibelius Prize, awarded in 1982 for her distinguished performances of the Sibelius Violin Concerto. Great Britain honoured her with the title of “Commander of the British Empire” (1991), she received an “Honorary Doctorate of the Royal College” (2000), and in 2006 a Doctorate from McGill University in Montreal.

In 2001, the BBC in London devoted a week of “live performances” to her, drawing on archive material interspersed with interviews with Ms. Haendel herself. There have been documentaries on her life produced by the BBC, CBC (Canadian Broadcasting Corporation) , IDTV Amsterdam, Televizja Polska, and she has performed at the BBC Proms 68 times. Her reach in the old and new media is extensive, with hundreds of interviews and articles, Facebook pages, and YouTube videos, all devoted to her performances, lectures and life.

In 2006, Ms. Haendel played in Poland before Pope Benedict XVI (whom she chatted with after) on the site of the former Nazi camp Auschwitz-Birkenau performing Handel’s prayer Dettingen Te Deum with harp, as organizers wanted her to play a Jewish score. That year Ms. Haendel also gave a concert in her hometown of Chelm in a programme of Bach, Wieniawski, Tartini, Sarasate, Bruch, and Tchaikovsky conducted by Stanislaw Galonski. In honour of Ms. Haendel, her birth town leadership sculpted a statue of her as a child on a bench in the main square, and named a concert hall in her honour.

Ms. Haendel has been a staunch supporter of developing musical artists, and she has inspired a new generation of violinists including Anne-Sophie Mutter and Maxim Vengerov. In 2008 she gave master classes in Keshet Eilon Kibbutz Israel, Verona Italy in 2010, and in 2012 Ms. Haendel was a guest artist at Cambridge (England) International String Academy.

Ms. Haendel conducted master classes for most of her latter years, and served as a model for so many violinists and musicians, such as the prodigiously talented Ms. Chloe Hanslip, and “The Violin Girl” Leia Zhu whose dream it was to visit Ms. Haendel a few years ago.

Ms. Haendel had dedicated her life to performing for her adoring fans, and has been a teacher and inspiration to a new generation of musicians around the world to whom she has contributed so much of her time and passion (https://www.independent.co.uk/arts-entertainment/classical/reviews/preview-ida-haendel- the-razumovsky-academy-wigmore-hall-london-763203.html)

Ms. Haendel had also been a passionate volunteer in elevating the morale of the people of England during WWII when she played for the troops, factory workers and in hospitals for injured soldiers. She had raised money and awareness through benefits for Israel, and financially as well as personally supported Harmony for Humanity and the Daniel Pearl foundation, as can be seen in this video with Herbie Hancock and Sir Elton John (https://www.youtube.com/watch?v=EiadQEF06bI) ,where thousands of people around the world joined hands in a musical celebration to support the cause.

In her Miami home, mementos of the past were all around her. Pictures with famous musicians, politicians, conductors and royalty, including those of her many interactions with the late Princess Diana and Prince Charles, Queen Fabiola of Belgium, Prime Minister Menachem Begin, all who attended and admired Ms. Haendel’s musical virtuosity.

Ida Haendel, often referred to as the ‘Grand Dame of the violin’, was one of the most significant figures in classical music this century and a proud global citizen, the world has lost a musical legend and she will be missed by all who knew and admired her, her friends and close family who loved her dearly. 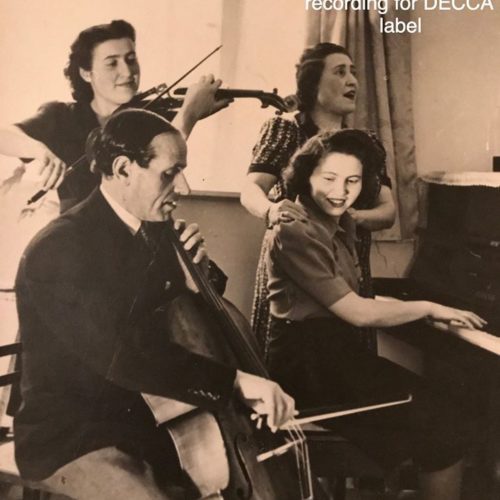