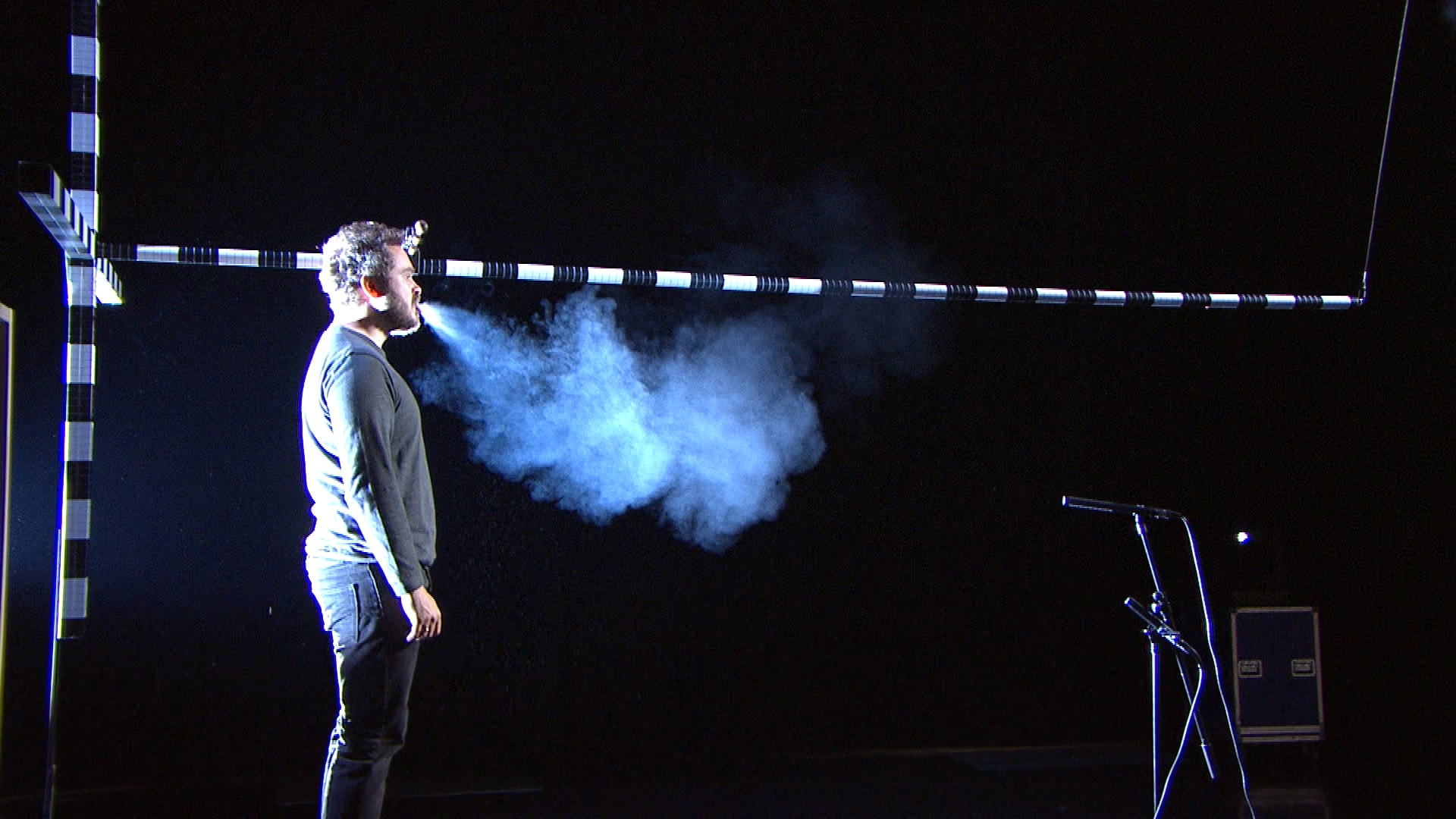 The chorus of Bavarian Radio commissioned a scientific report on the Covid-19 risks associated with singers. The results make uncomfortable reading.

Aerosol study with the choir of the BR: First results
Scientists from Munich and Erlangen are studying corona infection risks when singing

What is the risk of getting infected with the corona virus while choral singing? And how can this risk be minimized? After contagion cases in choirs in the USA, Amsterdam, but also in Bavaria and Berlin, Bayerischer Rundfunk conducted an extensive test series for its orchestras together with the LMU Clinic Munich and in cooperation with the University Clinic Erlangen (FAU).

The first partial results of the scientifically unpublished study are now available.
In it, the participating scientists set out the circumstances under which they consider singing in corona times to be responsible for health – with a view to the distance between the singers and the indoor climatic conditions.

“After the first shock of the lockdown and examination of the restrictive requirements, we quickly became active together with our BR company doctor, Dr. Benthaus, under what conditions and with what repertoire the artistic operation could be resumed – provided that protection and the health of our choir members has top priority. In the weeks before it had become more and more clear that pure droplet infections could not be an adequate explanation for the high number of infections especially in choirs “, Susanne Vongries, manager of the choir of the BR, describes the initial situation.

However, since there is very little reliable scientific knowledge about contagion risks within vocal ensembles worldwide, the BR sought technical advice from Prof. Dr. Matthias Echternach, head of the department for phoniatrics and pediatric audiology at the LMU Clinic Munich and self-trained singer.

“With Prof. Dr. Echternach and Dr. Stefan Kniesburges from the University Hospital Erlangen, we have found promising partners with whom the study was prepared and implemented in a very short time. From the beginning, the members of the choir have also been very committed to serving them Data collection provided to generate new knowledge, “said Vongries.

Together with Stefan Kniesburges, fluid mechanic at the University Hospital Erlangen (FAU), Matthias Echternach designed a study to measure the radiation and distribution of both larger droplets and small particles – the so-called aerosols – when singing, speaking and singing texts . The peculiarity: In contrast to studies relating to flow velocities of particles, the spread and distribution of the droplets and aerosols in the room were examined in more detail in these experiments.

To this end, the scientists set up two test arrangements in Studio 2 at the Unterföhring site in BR. In these two settings, from May 20 to 26, 2020, they had ten subjects from the choir of the BR and ten wind players from the symphony orchestra of the BR sing, speak and speak consecutively at different volumes. The data evaluation for the measurements with the wind instruments is still pending.

Aerosol clouds made visible and measured

The first setting consisted of high-speed cameras and laser equipment, with which the scattering of the larger droplets could be investigated: how are they emitted by the mouth and instrument, which speech or singing passages generate the largest amount of droplets?

In the second setting, cameras and white light were used to analyze how the even smaller aerosols leave the mouth and nose and how they spread into the room. In order to make the distribution of these tiny particles visible, the subjects inhaled a carrier solution of e-cigarettes, which was then visible in bright light during and after the vocalization.

Conclusion: More distance to the front than to the side

The evaluation of the measurements over the emitted aerosol clouds showed: The choir members should keep a greater distance from their colleagues in front than to the side. Always provided that the room is permanently ventilated and that the aerosols are regularly removed by fresh air. It would also be better if there were partition walls between the singers.

“We measured an average distance of a little less than one meter for the sung text, but some singers also reached distances of 1 to 1.5 meters, so that safety distances of 1.5 meters are probably too small and distances of 2 to 2.5 meters may seem more sensible, but the data only refer to the direct propagation through the self-impulse when singing, but for the safety of the singers it is important that the aerosols are also permanently removed from the room so that they do not move accumulate, “says Matthias Echternach.

“We found significantly smaller distances to the side than to the front, so that the distances could be chosen to be smaller, around 1.5 meters. Here, too, the fresh air is constantly supplied to remove the aerosols from the air,” says Stefan Kniesburges.

Singing with a mask?

Tests with a mouthguard showed that “when singing with surgical masks, the large droplets are completely and the aerosols are partially filtered out, but some of the aerosols are emitted slightly upwards and to the side,” says Kniesburges – because the masks on the Do not seal the sides and nose completely. Singing with a mask, so the discovery, would be an option by reducing the particle emissions, but not really for professional choirs, “because I have to articulate very well and of course need the smallest nuance of sound,” says Echternach. With church or other lay choirs, however, singing with a mask should “prevent a lot”. 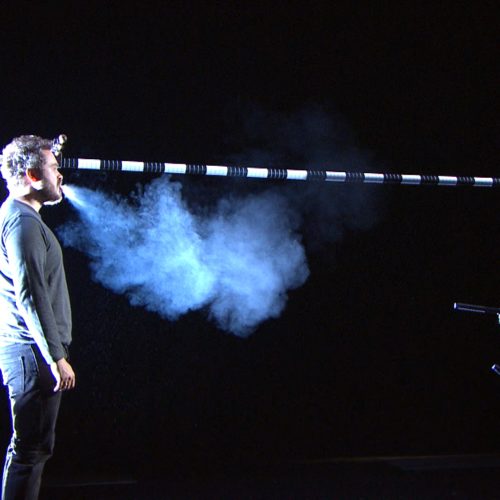 “The study gives us more clarity in order to be able to better assess the distance rules and climatic conditions in rooms, and we would like to make our findings available to everyone, not least to the decision-makers for new, general requirements,” said Susanne Vongries, manager of the choir of the BR the first partial results of the scientifically unpublished study. “The results will and should not only be helpful to the BR choir. There is a great thirst for knowledge and knowledge in this area in the world of professional choirs in concert and opera as well as in amateur choir singing. The health and safety of not only the members of the choir of the Bavarian Radio , but all choirs and vocal ensembles should come first. ”

For all activities, the choir of the BR is bound to the requirements of the “Hygiene Concept for Cultural Events and Rehearsals” by the Bavarian State Ministries for Health and Care and for Science and Art from June 15, 2020.

Own compositions for singing with mouthguards

While the study was still running, members of the BR choir have developed and implemented many creative alternatives to conventional concert and rehearsal operations within the current possibilities. Small ensembles have developed literature from Lassus to Hindemith and Pärt, and in addition to numerous court concerts in social and charitable institutions, two composition orders have been placed with Rupert Huber and Howard Arman, who composed works for singers with mouthguards. Rupert Huber’s work “U + 1F637” (corresponding to the numerical code for the smiley with a face mask) was created, the melodrama “The Sculptor” comes from Howard Arman’s pen. Both works were produced in the BR studio. U + 1F637 can already be seen and heard on the BR cultural stage (br.de/kultur), the composition by Howard Arman will be put online there soon. 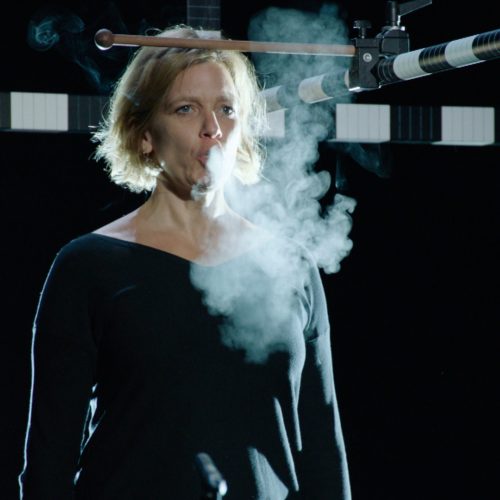