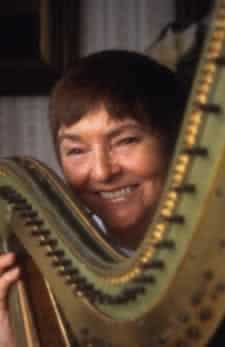 Death of a harp titan

We’ve been informed of the death of Ann Griffiths – Welsh harpist, harp historian, composer, teacher and editor – in her mid-80s.

After graduating in Welsh at Cardiff University, she obtained a Premier Prix of the Paris Conservatoire in the class of the legendary Pierre Jamet – the first British-born harpist ever to do so. Later she graduated as a Master of Arts in Musicology from the University of Birmingham. As a performer, her major interest is in historical harps, and she is passionate about the harp music of John Parry, Krumpholtz, Dussek, Parish Alvars, John Thomas and N.C. Bochsa. She has written extensively for various scholarly publications including the New Dictionary of National Biography and the New Grove Music Dictionaries, where she was responsible for 46 entries, including a completely new major article on Sebastian Erard. At present her main scene of activity is Adlais Music Publishers, of which she is Director. She is a member of the Board of Governors of the World Harp Congress and former Chairman of the Lady Llanover Society.