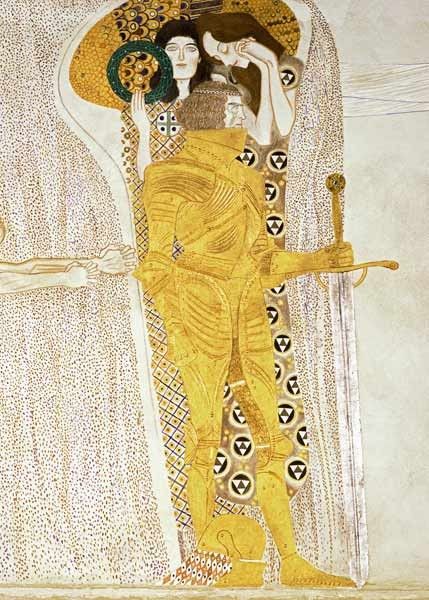 Was Mahler right to change what Beethoven wrote?

In the first week of April 1897, the week that Gustav Mahler arrived as a conductor at the Vienna Opera, Gustav Klimt and other artists broke away from the establishment Kunstelerhaus to form a modernist Secession group. Mahler became director of the opera six months later, just as Klimt raised enough money from his wealthy sitters to build a gold-topped Secession building in the heart of Vienna, a symbol of all that was progressive in the fin-de-siècle. Mahler, at the opera, proclaimed war on encrusted traditions, dismissing them as slovenly. Artist and conductor were driving in the same direction.

In March 1902, Mahler married Alma Schindler step-daughter of one of Klimt’s closest associates, Carl Moll. The following month, Klimt opened his 14th exhibition at the Secession, a show dedicated to the modern representation of Beethoven in art. Mahler launched the exhibition by conducting his own arrangement of a theme from the closing chorus of Beethoven’s Ninth Symphony. This reduced score was regarded as an outrage, consuming acres of newspaper space and giving the Secession the best lift-off Klimt could possibly have wished for.

Klimt proceeded to raise the noise by several notches. The centrepiece of the show was a sculpture of Beethoven, heroic but half naked, by the German symbolist Max Klinger. Beethoven had such mythical status in German culture that the idea he ever inhabited a human body was itself unimaginable and his nakedness was too exciting for words. Around 60,000 visitors rushed to see it over the next three months. Klimt’s idea appears to have been to reduce the sacred veneration of great artists by reminding the public that they were creatures of flesh and blood. 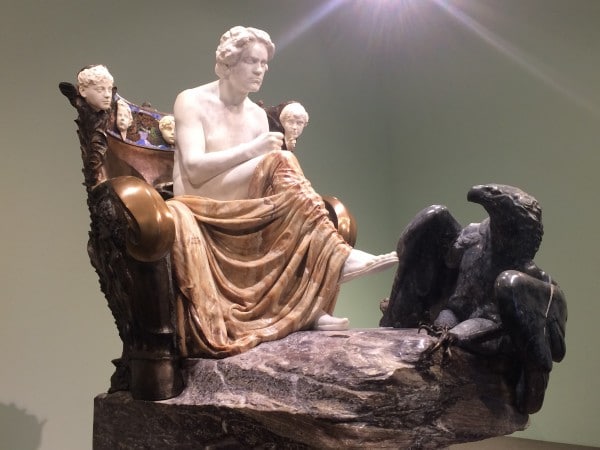 Howls of outrage resounded; even the Emperor Franz Josef was said to be upset. And there was worse when people raised their eyes to the ceiling. Klimt had painted a frieze around the upper walls of his Secession building depicting mostly naked women and, at its centre, a heroic knight in golden armour, a man whose features were unmistakably those of Gustav Mahler.

The outrage quadrupled. That a controversialist like Mahler should command centre stage at an exhibition notionally about Beethoven was too much for polite opinion to bear. Conservatives demnded an end to all this tampering with Beethoven. Mahler had already been ousted as conductor of the Vienna Philharmonic following complaints from some players at his ‘ retouches’ – creative revisions – to Beethoven’s sacral scores and, in particular, to his expansion of a movement of Beethoven’s 11th string quartet into a suite for full string orchestra.

To tamper with Beethoven, they declared, was to desecrate holy writ. Mahler replied that all art was experiment and he was merely extending the process that Beethoven began. His expansion, as you can hear, is no great improvement on the original. Was it worth doing? Mahler thought so at the time but he did not persist in performing it.

Beethoven’s 11th string quartet is his last before what are known as the late quartets. It bears many of their traits of seriousness – hence the name – and questing into infinity, but it is generally warm-toned and surprisingly short, given the wealth of melodic ideas. We reach the third movement before hearing anticipations of the headlong rush into oblivion that characterises the late quartets and the world beyond worlds that Beethoven inhabits in his final agonies.

Beethoven knew he had stepped in this seminal work beyond the bounds of public comprehension, telling the Englishman Sir George Smart that it ‘is written for a small circle of connoisseurs and is never to be performed in public’. Despite his reservations, there is deep consolation to be derived from the closing Larghetto movement. It is also by no means the most difficult of his quartets to play. At least one major conservatory applies it as the work by which all student string quartets are trained and tested.

I have already surveyed this quartet in his series three months ago, but the Mahlerian context and the period of lockdown have prompted some further thoughts that I want to share.

The earliest recording of the 11th quartet is by the Busch Quartet – Adolf and Hermann Busch, Gösta Andreasson and Karl Doktor – at Abbey Road in 1932. It is a touchstone in its own right, nicely crafted, moderate in tempo and unfailingly in tune. Exemplary performance of a different order is found in the Alban Berg Quartet’s recording almost 60 years later – much quicker and with a near-obsessive attention to tonal beauty. A little on the cold side? That’s a matter of taste. If it’s cuddly warmth you’re after, without a reduction of serious mien, try the Amadeus.

My own inclinations incline to the 21st century where three young quartets set a totally different pace and perspective. The Belcea (2011), built around Corinne Belcea-Fischer, exude nervous energy, impatience and a rebellious dissatisfaction with all that has gone before. The Artemis, all-German in its 2005 formation, invest the work with shadows of German history, so much so that one could easily imagine the finale having been written, or at least performed, in January 1945. It is a gravely unsettling intepretation, and therefore cherishable.

Alongside this pair I love the vast confidence expressed by the Quatuor Ebène – Pierre Colombet (Violin), Gabriel Le Magadure (Violin), Marie Chilemme (Viola), Raphaël Merlin (Violoncello) – in a 2019 Australian recital, where the finale becomes an ode to optimism, a different hemisphere, a better civilisation. Mahler – and Klimt – would, I suspect, have appreciated their logical positivism.

« UK opera singers tell Government: We are the worst affected

How records get chosen for review »