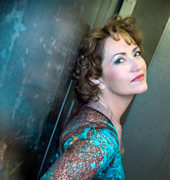 The international coloratura soprano Laura Aikin has just signed off for the last time as a shel-stacker at a Rewe store in Berlin.

I never even thought of applying for unemployment benefits because I thought that only permanent employees would get that. There is no such thing in America, nor in Italy. I never got any help from the state there. I thought the idea that Germany would do something like this was crazy….

When my daughter had her last riding lesson, I was shopping and saw the poster at Rewe that they were looking for employees. I worked there a few days later. They were just desperate because they needed so many people to keep up with the bulk purchases that were just starting.

There was chaos. The company … told us we should work quickly, quickly, quickly. On the other hand, of course, Rewe wanted everything to be properly arranged. And in between the many people who wanted to shop and sometimes needed advice. My job was only to clear shelves and clear away garbage. I have been moving non-stop. Sometimes I was really sweating. It was like my daily gym, I actually lost weight. But at some point the pain came. I wore a mask very early on before it became mandatory, which made everything difficult: when I had to walk, lift, carry a lot, I became dizzy and my blood pressure went very high. At some point my knees started to suffer.

Q Did people in the supermarket know you were an opera singer?

Yes, everyone knew, but they weren’t very impressed….

« Munich molester is still on the loose