Wolf Musique in Strasbourg is a legend.

Founded by Seligmann Wolf in 1825, Richard Strauss played half of Salome on one of its pianos. Gustav Mahler bought sheet music. Everyone went to Wolf. Seligmann’s son Lazare brought the Berlin Philharmonic on its first visit to France.

Wolf was a musical institution.

It’s a victim of the Covid economic crash. 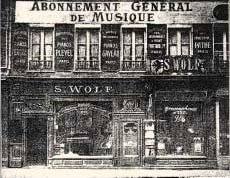