Carnegie Hall today announced that it will cancel all events in its three performance venues until January 7, 2021 due to the ongoing effects of COVID-19.

“This was a very difficult decision for us to make, however the safety of Carnegie Hall’s artists, audiences, and staff is paramount,“ said Clive Gillinson, Executive and Artistic Director of Carnegie Hall. “After consulting with medical professionals and other experts on a continuing basis, we have concluded, in the face of current government restrictions and social distancing protocols, that there is no other option but to extend the Hall’s closure through the end of the calendar year, allowing health conditions to continue to improve. While this has been an enormously challenging time for all of us, we remain focused on preparing for when we will be together again and, in the meanwhile, actively engaging audiences digitally in service of our musical mission.”

All Carnegie Hall performances from October through December 2020 have now been cancelled. 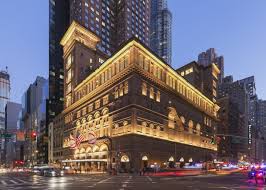 Those who live in New York and London gaze in mute wonderment at the resumption of performing life in Vienna, Salzburg and Prague.