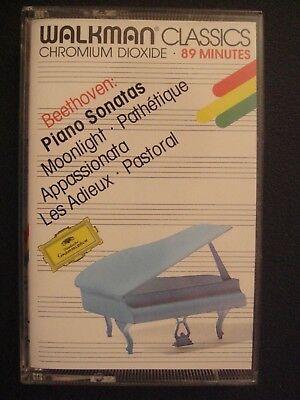 Beethoven’s Goodbye to all that

The last of Beethoven’s truly popular sonatas, it has three movements titled: farewell, absence, return. In other words, a piece of music intended to appeal to anyone who has parted from a loved one, endured a long emptiness and embraced a reunion. Simple, really.

Except nothing about Beethoven’s descriptions is unequivocal. He wrote the sonata as Vienna was under siege by the French. It was a horrible time for the composer, living in his brother’s underground cellar and barely able to create. He reported to his publisher: ‘I tell you that since May 4th, I have brought into the world little that is connected; only here and there a fragment. The whole course of events has affected me body and soul…. What a disturbing, wild life around me; nothing but drums, cannons, men, misery of all sorts.’

Yet his publisher gave the sonata a French title and Beethoven went along with it. The subtitles are in both French and German. Above the three first chords Beethoven wrote the syllables ‘Le-be-wohl’, German for farewell. He’s either ambivalent about the Austrian withdrawal, or he’s upset about having French culture and language in Vienna. Not until Gustav Mahler in Das Lied von der Erde will we see a composer caught in such agonised indeterminacy over an unspecified parting. What, exactly, was Beethoven suffering? The first chord is tentative, the second weak and the third deeply sombre. The official Austrian narrative has it that the sonata laments the forced departure of the Archduke Rudolf, Beethoven’s friend and patron. He might have been sad about it, but not that sad. Whatever the sonata is about, it is neither autobiography or self-analysis. Beethoven is telling, for the first and only time in a sonata, a story.

There are almost 100 recordings to choose from and the philosophical differences are not deep enough to warrant prolonged discussion. Mostly, it’s a matter of taste. Arthur Schnabel is a masterful, no-fuss storyteller who grips the attention with slight shifts of emphasis and a perpetual twinkle in his fingers. Claudio Arrau winds up the tension, Emil Gilels the pathos. Among the older pianists I find myself returning inexorably to Arthur Rubinstein although my reasons may be more sentimental than music-critical. Rubi was such a My Way pianist. Nobody has a touch like his.

Given the relative lack of profundity, any of the prolific mid-century pianists will satisfy – among them, Barenboim, Ashkenazy, Brendel, Kempff, Pollini and Schiff.

Two living pianists stand out. The American veteran Richard Goode has a sober authority that dispels extraneous thoughts about Beethoven under siege and allows us to focus on music as music. The young Frenchman David Kadouche (2019) seems to breathe more easily in this sonata than many of his contemporaries: his interpretation has an organic feel about it, relieved of historical considerations.

Variations in D major on an Original Theme for Piano op. 76

Also known as the Turkish March, this set consists of variations Beethoven wrote on a theme of his own devising, nothing to do with the Turks. He used it elsewhere as incidental music to the play ‘The Ruins of Athens’ and it achieved lasting popularity.

Ronald Brautigam plays them with great restraint on a fortepiano. Alfred Brendel clatters them against the ramparts. Between these extremes, the French pianist Brigitte Engerer has a deft and delicate touch that perfectly suits these trivial morsels. And Sviatoslav Richter just does his own thing.

US orchestra shuts down til August 2021 »