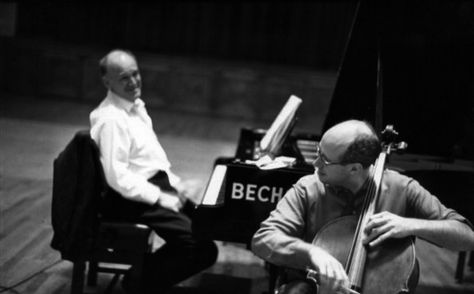 When Beethoven made the cello equal to the piano

The third sonata opens with one of Beethoven’s most seductive themes, an invitation to an evening of pleasure. While the listener is never quite sure in the first two sonatas for this instrument whether Beethoven really loved the cello or was just writing for a convenient player, here he leaves no room for doubt. The music is glorious. What’s more he takes a leap of faith in his musicians by giving the cello and piano virtually equal parts and trusting them to get along together. The mood of A major is always his happiest.

Ths structure, on the other hand, is wierdly unbalanced. The opening movement takes up fully half the work. The third movement is just 18 bars long, lasting less than two minutes. The finale finds the composer at his most boisterous, urging us to share his exuberance. The entire sonata lasts about 25 minutes and has been recorded almostt 200 times. The choice is simply staggering.

Selection must begin with Pau Casals, who managed to record the sonata twice in 1930, at a time when there was virtually no chamber music available on record. The first performance was with his regular touring partner Otto Schulhof, and the second with the starrier Mieczysław Horszowski. The Schulhof recording, astonishingly vivid, is the one to go for, although both sessions have moments of magic that every subsequent cellist must envy. Casals makes his low notes sound warmer than one could possibly imagine. After the War, he recorded the sonata once more in the French festival he founded at Prades, near the Spanish frontier, a gathering place each summer for artists who opposed the fascist regime of General Franco. Casals chose Rudolf Serkin as his piano partner in Prades and the result is, once more, captivating and richly communicative – albeit with less agreeable sound.

The French cellist Pierre Fournier, a general’s son who switched from piano to cello after his legs were weakened by polio, mixed in different circles from Casals. He had performed regularly in Paris during the German occupation and he was sentenced to a six-month concert ban after the liberation. Two of his three recordings of this sonata – with Arthur Schnabel (1947) and Friedrich Gulda (1959) are dominated by an over-assertive pianist. The third, with Wilhelm Kempff (1966) is mutually underpowered, refined and introspective. That said, the Schnabel recording is marvellously eloquent and the Gulda is playful beyond words.

The ebullient Russian cellist Mstislav Rostropovich would not be a natural first choice in Beethoven but his partner is the supernal Sviatoslav Richter and their dialogue in three recordings is constantly absorbing. Setting aside the one made in a Moscow studio in 1951, this recorded concert from the 1964 Edinburgh Festival will take your breath away. The atmosphere is so intense and the mikes so close, you geel as if you are up on stage turning pages for them.

So many recordings of this sonata are of lasting value. János Starker and Rudolf Buchbinder (1978) give a textbook performance, a tad pedagogic but unfailingly elegant. The bearlike figure of Lynn Harrell has one of his finest half-hours on record with Vladimir Ashkenazy (1987), notwithstanding unaccountably crabby Decca sound. Gregor Piatigorsky (1954) never quite sees eye to eye with the English pianist Solomon, but the tension between them make a refreshing change from so many benign collaborations. Leonard Rose with Glenn Gould (1960) is a taste that may take longer to acquire. The Austrian cellist Heinrich Schiff is captivating in a 1982 Salzburg Festival recital with Christian Zacharias. There are simply too many outstanding recordings of this work to describe more than a small proportion of the most gripping and unusual ones.

I find performances of this work with a period piano curious and unfulfilling. You are never allowed to forget that the musicians are trying to make a point about authenticity and the music seldom lives up to its potential. There’s a good session by Steven Isserlis and Robert Levin on the Hyperion label (2012, not on Idagio) and another by Pieter Wispelwey and Paul Komen, playing an 1823 Broadwood of the kind that Beethoven would own at the end of his life. Curious, but quirky.

Leonard Elschenbroich (cello) and Alexei Grynyuk (piano, 2019) distend some of their tempi with great daring and no little beauty. Jean-Guihen Queyras (cello) and Alexander Melnikov (piano, 2014) achieve a kind of confidential conversation in which the listener feels almost an eavesdropper. But the recording to which I return over and agaun is Mischa Maisky with Martha Argerich in 1994, two close friends who have an unforced understanding of Beethoven and each other, anticipating the next flight of fancy yet always greeting it with surprise and delight. Chamber music making does not get much better than this.

Tomorrow, we take a look at the 4th and 5th sonatas.