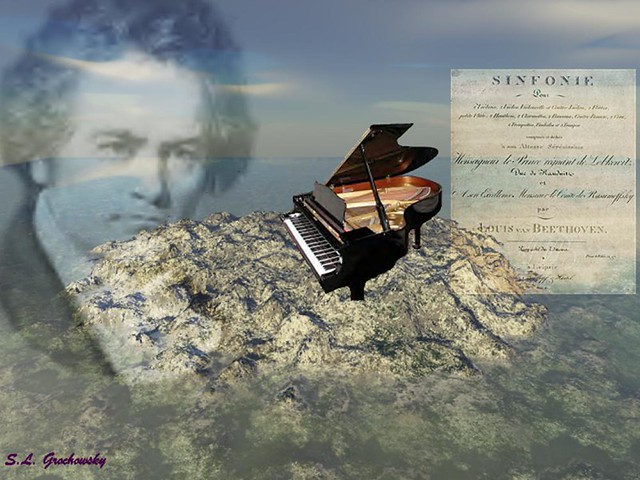 Is there a trio around these days that can lay the Ghost?

At the risk of being called out as a trend-watcher, I have spotted a surge in popularity for a particular category of Beethoven’s works. Looking at the streaming site Idagio, there has been a boom in recordings of the piano trios – as many as 40 of the opus 70 alone in the past decade, equivalent to a third of the total in the whole of the last century.

This does not equate to a rush on the box-office. None of thse recordings has been a best-seller and there has been no rush by chamber music halls to replace string quartets. All one can say with any validity is that piano trios have become more popular among musicians, perhas because the format represents best the fluid nature of most musicians’ lives. String quartets have fixed personnel. Piano trios come and go as they please – which accounts for some of the charm inherent in the music itself.

Beethoven had gone ten years without writing a piano trio when he dashed off this pair as a thank-you note to his hostesss, Countess Maria von Erdödy. He performed them himself in her salon with the violinist Ignaz Schuppanzigh and the cellist Joseph Linke. The first trio was nicknamed ‘the Ghost’ after Beethoven’s pupil Carl Czerny said it reminded him of Shakespeare’s Hamlet. Oddly enough, on the other side of a sheet with sketches for its D-minor movement, Beethoven wrote notes for a planned opera on Macbeth, with a witches chorus in D minor. It was an astonishingly fertile period in his mid-life and the piano trios sound as if they were written without any effort whatsoever.

The benchmark performances are by the only fixed-membership piano trio, the Beaux Arts – Menahem Pressler (piano) Bernard Greenhouse (cello) and either Daniel Guilet (violin) or, from 1962, Isidor Cohen. Pressler, although the youngest, comes over as the driving force, leading from the piano as Beethoven would have done. Guilet’s tone in their 1964 recording is wispy and wistful. Cohen’s in 1979 is conventionally robust. This is the ultimate professional piano trio, and I prefer the earlier formation.

Yehudi Menuhin and his sister Hephzibah made two recordings of these trios – in 1936 with the New York Philharmonic principal cellist Maurice Eisenberg and thirty years later with the French soloist Maurice Gendron, who taught at Menuhin’s school. Both performances are so polite you would think the artists were sitting on a timebomb. Yehudi is the comet and the others are hitched to his tail. This kind of set-up has mercifully – with rare exceptions – vanished from the music scene. Its counterpart is Rudolf Serkin‘s vigorous 1949 reading with two Busch brothers – Adolf on violin and Hermann, cello – as authenic an act of chamber music as you’d find anywhere on record.

Glenn Gould‘s account with violinist Oscar Shumsky and cellist Leonard Rose was captured at an Ontario summer festival in 1960, and all the better for that. Gould is unusually relaxed and eager to engage. Rose and Shumsky are tolerant elder statesman. Rose features again in a starry 1970 recording with Isaac Stern and Eugene Istomin in the kind of poor balance and dim sound that make you wonder which union branch the Columbia label turned to for its engineers. The Abbey Road sound that same year for Barenboim, Zukerman and Du Pré is far superior, but Barenboim seems in a rush to get away and I suspect the performance was staged more for television cameras than musical excellence. In the summer of 1970 these young musicians were the talk of London town.

You have to go a long way ahead to find an account as enjoyable as the Beaux Arts. Vladimir Ashkenazy, Itzhak Perlman and Lynn Harrell make light work of these pieces, perhaps too light. The Chungs – Myung-Whun (piano), Kyung Wha (violin), Myung-Wha (cello) – are sober, determined, a bit businesslike.

Among the rush of recent recordings, I am smitten by the Capucon brothers with pianist Frank Braley in the Ghost – a studio reading with something of a festival atmosphere – and by the young Van Baerle Trio from Holland, made up of Maria Milstein (violin), Gideon den Herder (cello) and Hannes Minnaar (piano). What’s so refreshing about them is that they give each other room to breathe and fantasise. There will never be another Beaux Arts Trio – nor should there be – but this new generation has found its own way to lay the Ghost.

In the opus 70/2 I would choose Isabelle Faust (violin) with Jean-Guihen Queyras (cello) and Alexander Melnikov on fortepiano (2014) above other modern recordings, both for freedom of expression and for the edge of danger to the interaction of the strings with the light keyboard. You’d imagine Beethoven would have pounded such an instrument to matchwood, but Melnikov does not hold back and the music shines through as if new.

« The Slipped Disc daily comfort zone (62): Birth of an anthem

Just in: Yannick is selling his baton »