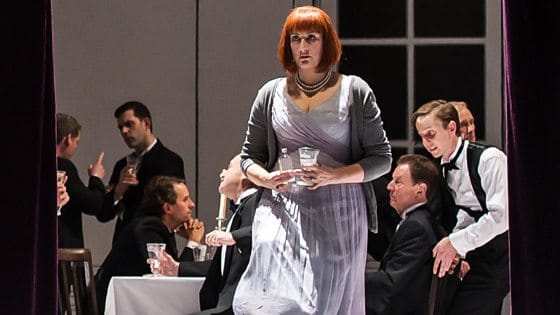 Ever been barred by security from going on stage?

I’d love to hear your stories about tussles with concert hall security when you had to make an entry from somewhere other than the stage, or appear at a later time during a performance. 😀

I have two tales as Brangäne – the Wachruf and two from Gerontius.

Tristan. The orchestral manager didn’t check in advance with the venue management or security that I would be singing from the organ loft for the Wachruf. I actually had a physical tussle with a security guard in a Spanish concert hall and had to LOCK MYSELF IN to stop him dragging me out. The responses from the security guard had been a monosyllabic “NO” with much wagging of his finger. With my basic Spanish it was impossible to persuade him. I knew he understood me but he hadn’t been briefed. I could hear my cue approaching so I just pushed past him and thankfully the door had a bolt. He was yelling in the corridor and banging on the door!! Can you imagine..during the closing bars of the duet?!! Einsam wachend in der Nacht had a dual meaning!! I really was being a bold Branny. Fortunately only the people around the loft looked mildly concerned.

A similar thing happened in the Albert Hall Prom with Sir Simon. When I was allowed in to the hall, finally, I was seated to the upper left of the organ loft, among the audience. As I stood up, preparing to sing I was told by some audience members behind me to sit down and when I started to sing I was shushed by one outraged person!

Gerontius. The festival ushers wouldn’t accept that the Angel enters in Part 2. The door backstage in the giant British cathedral was mysteriously locked, so I ran the length of the building to find the other door. The ushers physically barred me from walking back down a side aisle to the stage. The musicians were waiting for me the other end of course so I pushed past the ushers (second time that day..) and wafted down the aisle with ushers chasing me. I also had food poisoning so could have done without the excitement.
The second Gerontius tale was the same day, earlier in rehearsal where again the ushers were over zealous about who is allowed in front of the roped off space. A rather senile usher tried to argue that if I ‘really was a singer’ why wasn’t I already on stage”. No amount of indignant explanations sufficed so he tried to drag me out! When that failed, he went to the festival director, also seated inside the roped off area and who hadn’t seen my drama in the side aisle, and tried to eject him too!

As an addendum, Paul Nilon, Neal Davies & I were locked out of our changing venue afterwards with no one about. We found someone eventually.

« Wigmore Hall is back with a radio blast