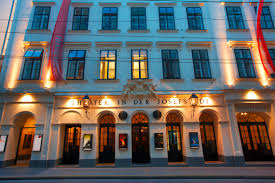 So Beethoven, how do you like my new house?

The Consecration of the House, Overture opus 124

In between the Missa Solemnis and the Ninth Symphony – which is like saying between climbing Mount Everest and K2 – Beethoven dashed off an overture for the inauguration of the Theater in der Josefstadt in October 1822.

He had immersed himself in Handel and Bach while writing his Mass and he was left with all sorts of ideas as to how the two early classical styles might be merged and adapted for contemporary use. He even toyed with an idea for composing a fugue on the notes B-A-C-H (B-flat). Unusually, he got blocked. So he went off for a walk in the autumnal woods near Baden with his nephew Karl and companion Anton Schindler, who reports: ‘Beethoven told us to go on in advance and join him at an appointed place. It was not long before he overtook us, remarking that he had written down two motifs for an overture…. He expressed himself also in the manner in which he purposed treating them – one in the free style and one in the strict and, indeed, in Handel’s. As well as his voice permitted he sang the two motifs and then asked us which we liked the better… The nephew decided in favour of both.’

This is a rare, marvellous and (Schindler’s word) roseate insight into Beethoven’s mind in the best of moods, when he was willing to engage others in the actual process of composition. What emerged from the day out was a solemn, Bach-like opening, followed by a great Handelian fugue, both developed by Beethoven with a Rossinian lightness appropriate to a new theatre and a ceremonial flourish for the great occasion. Midway in the overture you can hear him dissolve and resolve a theme as he was about to do ahead of the choral finale of the coming ninth symphony. For this reason, if no other, the overture demands to be heard.

It had a further significance in the development music. Richard Wagner endowed it with almost sacramental dimensions, taking the word ‘Weihe’ (consecration) from the title and attaching it to his last opera, the Bühnenweihfestpiel also known as Parsifal. From the late 19th century on, it became  obligatory at the opening ceremony of any German concert hall or opera house.

Beethoven regarded its first performance as a success, albeit in chaotic circumstances. The newly organised orchestra of the Josefstadt theatre did not receive it til the afternoon before the opening, and with innumerable mistakes in every part. The rehearsal which took place in the presence of an almost-filled parterre scarcely sufficed for the correction of the worst of the copyist’s errors. Among other novelties, we discover, Cherubini’s overture to Medea was played by a musical clock that was the star attraction of a neighbouring restaurant. Music in Vienna was not taken as seriously as we are sometimes given to understand.

On the night of October 3, 1822 Beethoven conducted the overture while seated at a piano with his left ear to the stage, trying to absorbe the vibrations with what little hearing he had left. Eighteen months later, he repeated it as a curtain raiser to the world premiere of his ninth symphony.

Among some three-dozen recordings, the oldest commands attention if only for its terrifying entries and utterly Germanic march. The conductor, at Abbey Road in 1938, was the 75 year-od Felix Weingartner who had known both Liszt and Brahms and was the last surviving contact with people who had met Beethoven himself. A player in the London Philharmonic Orchestra told me that if they lagged behind his beat Weingartner would stop them and say ‘you know, Doctor Brahms told me it went like this.’ You must hear this. It knocks all pretensions to ‘authentic’ performance into a fairground stall.

Igor Markevitch, whom Diaghilev once hailed as ‘the next Stravinsky’, takes a Parisian orchestra on a cross-cultural fusion of German dignity and precision and pastel-coloured French elegance with brightly shining horns. Truly well worth hearing.

Lorin Maazel was born to conduct this sort of thing, music full of incident and no underlying complexity. Antal Dorati does it even noisier. Claudio Abbado directs the Berlin Philharmonic with tremendous grace and awesome solemnity. But the best performance I have heard is Riccardo Muti’s in 1988, a reading that draws in the fripperies of Cherubini, the fun of Rossini and the theatricality of Handel into a short appetiser that is fundamentally Neapolitan and spicy – a ribald contra to the hevy German diet. Muti was midway in his music directorship of the Philadelphia Orchestra and the mutual understanding is audible in every hair-raising risk they take. A tremendous achievement.