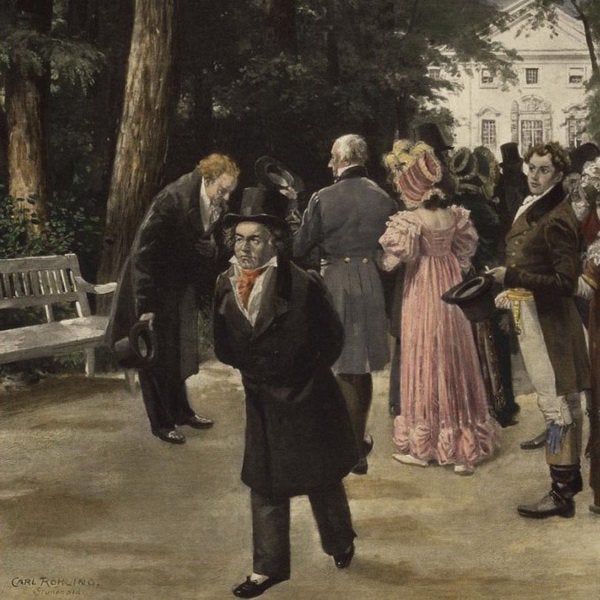 Beethoven and his fear of the sea

At no point in his life did Beethoven take a sea voyage. It is believed he visited the Dutch coast at Scheveningen as an adolescent in 1783 but he was not keen on what he saw: a natural element that could tranform in an instant from placid to life threatening. Although he received repeated invitations to England, he never contemplated setting foot on a sea-going ship. Both Mozart and Haydn before him had shown no such qualm and Felix Mendelssohn, his immediate symphonic successor, was practically a world traveller. Beethoven, however, raised beside the Rhine, had no appetite to engage with any broader body of water.

His short oratorio ‘still sea and prosperous journey’, was stimulated by his meeting with Goethe at the Bohemian spa town of Teplitz in the summer of 1812. Johann Wolfgang von Goethe was the most celebrated poet in the German language, Beethoven the most important composer in German music. Goethe was 21 years older, conservative by nature and suspicious of the immense noise Beethoven had made with his fifth symphony. Bethoven was respectful, wary and not to be browbeaten. Goethe told his confidant, the composer Carl Zelter: ‘His talent astounded me; unfortunately he has an utterly untamed personality; (he is) not altogether wrong in finding the world detestable, but (he) hardly makes it more pleasant for himself or others by his attitude. Yet he must be shown forgiveness and compassion, for he is losing his hearing.’ He was smitten, nonetheless, by Beethoven’s piano playing.

Beethoven reported to his publisher: ‘I told you Goethe is here. I spend time with him every day.’ It is related that, when out walking, they saw a royal party coming the other way. Goethe bowed low and doffed his hat; Beethoven strode straight ahead. The story may be apocryphal but Beethoven affirms the gulf between them in another letter from Teplitz. ‘Goethe revels in the court atmosphere more than a poet should. Is there any point in discussing the absurdities of virtuosos, when poets, who should be regarded as the nation’s first teachers, forget everything for glamour’s sake?’

These reservations did not prevent him from setting two Goethe sea-poems for orchestra and chorus. In the first, the ship is becalmed in still waters, a cause for grave anxiety since every day it would run lower on food and supplies and the profts from its voyage would diminish. ‘Deathly, terrible stillness,’ writes Goethe. The second poem depicts the ship’s joyous last dash for port. ‘The fog is torn, the sky is bright, and Aeolus releases the fearful bindings.’ The music for the first half is hushed, almost soporific. The second part begins with an instrumental imitation of high winds and a choral jubilation.

The cantata is not one of Beethoven’s finest inspirations. In describing the sea he falls far short of Mendelssohn’s subsequent use of the same title, a purely orchestral evocation of Goethe’s poems which he clearly experienced more viscerally than Beethoven had done. Mendelssohn’s tone poem is performed far more frequently than Beethoven’s cantata and achieved lasting popularity. That said, Beethoven’s effort is not without significance. His engagement with Goethe demonstrates confidence in his own status, and the music of the cantata has intimations of what might be coming next, the Hammerklavier sonata and the explsive finale of the ninth symphony.

There are remarkably few recordings of this work, and not all of them are uploaded yet onto Idagio. A Claudio Abbadon performance for Deutsche Grammophon has a marvellously hushed introduction but a less convincing apotheosis. 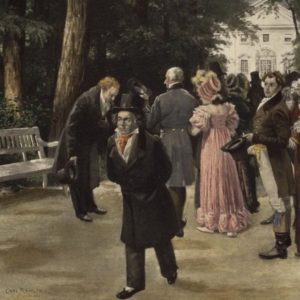 Michael Tilson Thomas with the London Symphony Orchestra is more blustery but less well sung. Richard Hickox with a small ensemble is seriously underpowered. There is resplendent beauty and ambition in Riccardo Chailly’s 1987 Berlin recording. But, for me, the most dramatic evocation of the sea and its changing moods is provided by the 1992 performance by John Eliot Gardiner with his Monteverdi Choir and Orchestre Révolutionnaire et Romantique. Gardiner sounds like a man who knows the elements and is prepared to do battle with them, heedless of personal cost.

« Manager who sacked maestro is under police investigation

The Slipped Disc daily comfort zone (74): Only Lenny dared to say it »