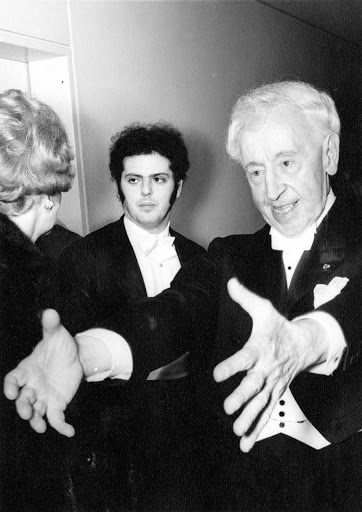 Can you hear Rubinstein in Barenboim?

The first of his concertos to display Beethoven’s modernity – as distinct from its predecessors that were Haydnesque and classical – the  C minor concerto gives us nonetheless and early nod in its opening theme to Mozart’s 24th concerto, in the selfsame key.

He premiered it in a concert in April 1803 together with his second symphony and the oratorio Christ on the Mount of Olives, presumably as the lightest of three novelties, and we have a vivid account from his Kapellmesiter, Ignaz Seyfried, just how it went:

In playing the concerto movements he asked me to turn the pages for him; but – heaven help me — that was no easy thing. I saw almost nothing but empty sheet; at most on one page or other a few Egyptian hieroglyphs wholly incomprehensible to me scribbled down to serve as clues to himself; he played nearly all of the solo part from memory, since, as was often the case, he had not had time to put it all on paper. He gave me a secret glance whenever he reached the end of one of the invisible passages; my visible anxiety not to miss a vital moment amused him greatly and he laughed heartily over it at the jovial supper which we ate later.

He gave the second performance to his pupil Ferdinand Ries, telling him to write his own cadenza. Beethoven rejected his first effort and warned that the second one might be too difficult. When Ries attempted it anyhow, Beethoven leaped to his feet to lead the applause, only to tell Ries afterwards that if he had played a wrong note ‘I would never have given you another lesson.’ These freeze-frames of Beethoven in action are inordinately valuable, illustrating at once his perfectionism, his fundamental friendliness and his propulsive futurism. Every work he wrote from now on addresses a new century, a new generation, untold hopes and aspirations.

There are well over a hundred recordings to choose from, a field made all the more crowded by the same pianist reverting to this compelling concerto over and over again. There are eight recordings listed on Idagio by Claudio Arrau, five by Emil Gilels, six by Arthur Rubinstein. I am tempted to throw my hands in the air and continue with yesterday’s recommendation for Radu Lupu, who in Beethoven can do no wrong. But which Lupu? His tempi in the 1970 London Symphony Orchestra recording conducted by Lawrence Foster are more than usually distended, whether at his insistence or the conductor’s. In the 1981 version with Zubin Mehta and the Israel Philharmonic the quality of silence for which Lupu is most famous transcends any monor reservations about the less-than-gleaming orchestral quality.

This concerto was one of Arthur Schnabel’s greatest accomplishments, demonstrating the full gamut of his thoughtfulness and his playfuless as well as the different colour he could derive from his keyboard. Although he re-recorded the concerto twice after the War with superior sound and Georg Szell and Issay Dobrowen as conductors, his original take from 1933 with Malcolm Sargent bears the mark of Schnabel at his most commanding, intriguing and entertaining.

Clara Haskil, a Rumanian-Jewish pianist with an unassailable feel for Mozart, gave a legendary account of Mozart’s C minor and is no less evocative in Beethoven’s. The last of her three recordings, made in 1959 with Igor Markevitch and the undistinguished Lamoureux Orchestra of Paris, exists in a time frame all its own, as if conductor and soloist agreed to ignore all tempo markings and let it take as long as it took. The performance is a marvel, a museum object in a custom-made case. Haskil, who lived almost all her life in ungenteel Swiss poverty, was just coming into her own when a fall on icy steps at Brussels rail station led to her death at the age of 65. Her friend Charles Chaplin said: ‘In my lifetime I have met three geniuses; Professor Einstein, Winston Churchill, and Clara Haskil.’

There are two schools of thought about Claudio Arrau. One holds that his 1957 recording with Otto Klemperer at London’s Royal Festival Hall is the definitive interpretation of this concerto. The other maintains that his performance with Bernard Haitink and the Concertgebouw is the greatest since sliced bread. The latter has much better sound. Haitink can certainly claim to be the most patient accompanist ever to mount a podium, so intense is Arrau’s introspection.

The Hungarian Annie Fischer is another who defies the march of time. Her 1957 Berlin recording with her compatriot Ferenc Fricsay is a joy from top to finish. Grim as the times were for East European artists, this pair transcended their circumstances in art of magisterial quality.

I am missing on Idagio a rare recording of the British wartime lioness Myra Hess with Arturo Toscanini. It’s out there, somewhere.

If I had to choose just one of the Glenn Gould recordings it would be the Herbert von Karajan Berlin Philharmonic production of 1957 in which soloist and conductor are on different planets in the middle movement and barely commuicating in the finale. The sound is fairly rough. His New York retake two years later with Leonard Bernstein is more serious, albeit less sulphurous.

Here are some more you should not miss. The otherworldly Arturo Benedetti Michaelangeli with Carlo-Maria Giulini and a Vienna orchestra in 1987, like a pair of tourists in a casino, always ready for one last fling. The shortlived Dino Ciani on a shocking Italian piano. The feather-fingered Rudolf Firkusny with the Czech Philharmonic conducted by George Szell at the 1963 Salzburg Festival. The mature Martha Argerich in 2004 with Claudio Abbado, a lifelong ally. The fastidious Pierre-Laurent Aimard with Nikolaus Harnoncourt in a memorable cycle that balanced historical practice with modern sensibilities. And the ursine Yefim Bronfman in David Zinman’s Zurich set that outdid the period experts at their own game. All epic and amazing.

Yet if you woke me up in the middle of the night and demanded a Beethoven C minor the first name to blurt from my lips would be Arthur Rubinstein. An entertainer to his core, Rubinstein never undersold the essential idealism of Beethoven and Brahms but showed that one did not have to frown in order to achieve seriousness of purposeness. He recorded the C minor concerto variously with Toscanini, Krips, Leinsdorf, Ormandy and more but the one that brings out the best in him is the fatherly performance that he gave in 1976 with the young Daniel Barenboim and the London Philharmonic Orchestra, a transmission of great tradition from one master-pianist to the next. And still fabulously entertaining. Listen to it now, and you’d think it’s Barenboim who’s playing.