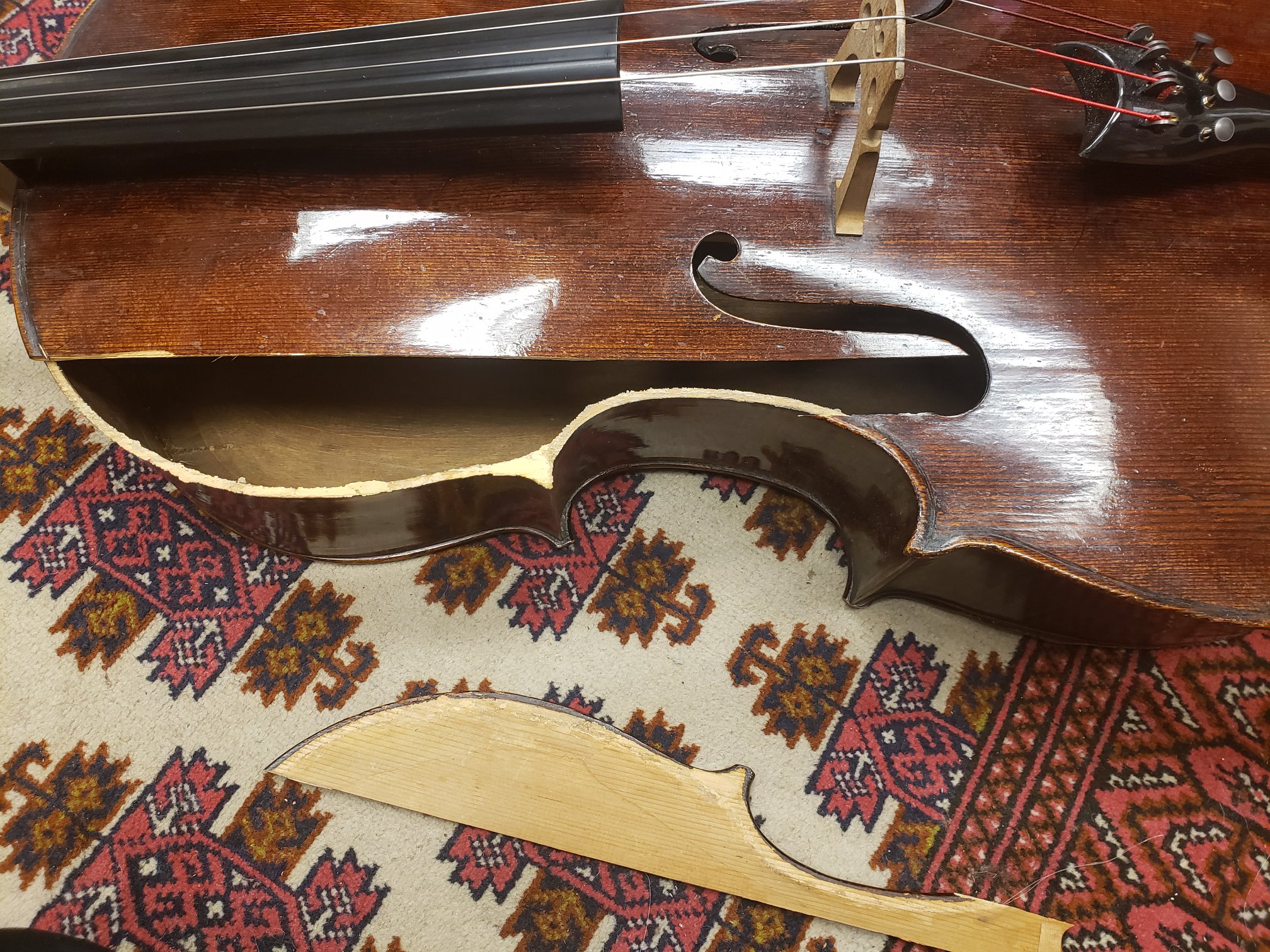 From the future memoirs of Brinton Smith, principal cello of the Houston Symphony Orchestra: 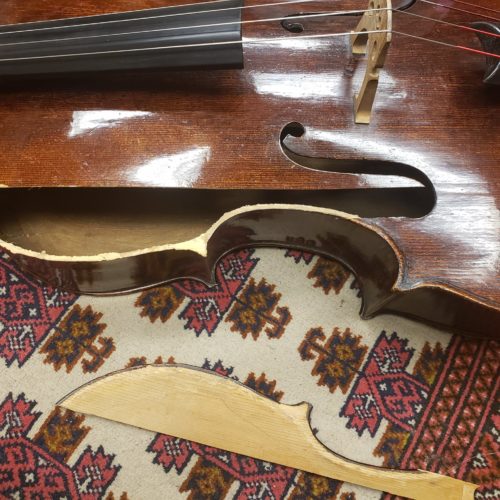 Some people will notice I’m using a different cello for the Houston Symphony living room concert next week.

It’s a long story. Exactly two months ago, on March 5th I played my last concert before everything started shutting down. I was the soloist for Esa Pekka Salonen’s Mania with the wonderful Jerry Hou and the Rice Contemporary Ensemble. I don’t usually play this kind of repertoire, but I thought I should push myself to try something out of my musical comfort zone.

The piece is insanely hard – melodies endlessly at the end of the fingerboard alternating with perpetuo writing with non-repeating patterns at breakneck tempi. Five minutes before I was to go onstage I put my cello down, stepped over it on my way to wash my hands and heard a crack behind me. A large section of the front of my cello had come off. I can only guess that maybe the very corner of my right heel caught the edge? I had injured my left foot that day – possibly a broken bone since it has taken months to heal – and was not quite on balance.

To turn around and see your cello in pieces is one of the worst feelings. To do this five minutes before an already stressful concert is only worse. I considered cancelling, but Jerry and the talented students had put hours of work in the score and the audience was sitting there waiting (including, somewhat randomly, composers John Harbison, William Bolcom, and Hans Jensen). Norman Fischer and my student, Russell Houston both valiantly offered their cellos despite my being 0 for 1 in keeping cellos intact, and I ended up playing the solo on Russell’s cello after taking a minute to get acquainted with it. It was not too terrifying because I figured if I sounded OK, it’s a win, and if I sound bad, I had a good excuse. But it was all I could do to keep my mind on the performance, knowing that when I got offstage I would have to deal with my cello’s gruesome injury. I joked that the challenges of the piece caused my cello to commit suicide…

The repair, though it looked worse than it was, will take months. The best New York luthiers all have major repair projects stacked up and most wouldn’t have been able to start working on my cello for many weeks. Luckily my friend Ken Kuo was able to convince the wonderful Stefan Valcuha to juggle things to fit it into his schedule. Since I was swamped with teaching, my wife took it to New York on March 8 on an overnight trip and Ken personally drove it to Stefan’s house in New Jersey (I can’t say enough for what a good friend Ken has been in my time of crisis, as well as my wife flying into New York for me just as covid exploded. Fortunately she was not infected).

A few days later, the US shut down and the concerts I was racing to have it back for all disappeared. But had Evelyn not gone when she did, the cello might still be stranded in Houston, still broken. Luckily Stefan’s workshop is in his house so he was able to keep working through all this. The top is in one piece again now, and finally back on the cello. It is almost whole again and I hope things will have settled down enough that I can go to retrieve it in early June. My cello (Gaetano Pasta, Brescia, c1715) has had a hard 300 years with more and worse historical cracks on the top than this, so it won’t really change the value and I’m hoping it won’t make much of a difference in the sound. We’ll see…

This cello has been my constant companion for 11 years. It is a dead tree with no leaves – just a thing, but I spent fewer days apart from it than even from my wife and daughter. It connects to you like your own arm. To lose it for months, to damage that I can only blame myself for, and then to watch the world shut down and all of us to lose all the music that meant so much to us … It all sent me to a rather dark place for many weeks, and my hands went fallow.

It is only my promise to the Houston Symphony to play this concert that has dragged me back into being a cellist. My first two days back were spent going through all of Book 2 of Gruetzmacher- painful without a thumb callus! I have not lost perspective- I am grateful my friends and family are well, and distraught for those we have lost, but this has been a strange personal journey to go through. Hopefully one month from today, everyone’s lives will be better and my cello and I will be back together again.

Meantime, next week you will hear my ‘old’ cello, which I played in the New York Philharmonic and my first years in Houston. Both the maker and the age are unknown, but I guess around 200 years old. Like a jilted lover thrust back into your life, we are slowly and awkwardly becoming reacquainted and learning how to dance again… So that is the story. The moral, of course, is never try anything new!!

« A German hall is ready to resume concerts