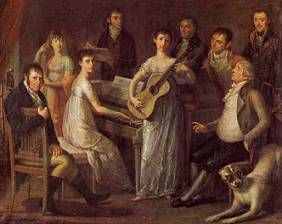 He didn’t really write it for Elise

Beethoven had been dead forty years before anyone thought of publishing this stray Bagatelle. The manuscript bore the inscription ‘For Elise, in remembrance of L. v. Bthvn, April 27, 1810.’ We have no idea who Elise was, or whether she ever saw the piece. One innocent suggestion is that she might have been a 13 year-old budding soprano, Elise Barensfeld. On the other hand, Elise might have been a misreading of ‘Therese’. Beethoven was very friendly at the time with a pianist called Therese Malfatti. This Bagatelle was found posthumously among her papers.

The piece is in the key of A-minor, turning into C-major at the tenth bar. The ambiguity adds tension to the simple tune. The tempo is 3/8, a kind of slowed down waltz in which anything might happen. Once published in 1867, the Bagatelle became instantly popular as a parlour piece, and much later as a concert encore and record gem. Its attraction is that it’s easy to play, after a few piano lessons, and easy to twist into any shape you like. In very recent times (2019), it has become a bestselling signature tune for the Chinese pianist Lang Lang, who plays one of the more extended versions at 3 minutes and 25 seconds, full of deep sighs and shoulder gestures. Idagio lists more than 70 versions, many prosaic beyond words. I’ll focus on the more interesting ones.

Artur Schnabel (1938) sets a no-nonsense pace at 2:43, no room for sentimentality or speculation, but some exhilarating finger runs and not a single one of his celebrated finger slips. Anyone would know Dame Myra Hess is a Dame from the way she plays (1957), with a heavy tread and a stern look at her listeners. My own detested piano teacher sounded a bit like this, leaden and unsmiling.

Wilhelm Kempff (1953) plays with the lightest of touches. Friedrich Gulda, captured live in 1966, is a magnificent tease, slowing down and speeding up at will. Jörg Demus’s touch is so soft as to be almost inaudible. His piano sounds more like a domestic upright than a concert grand. If you want authentic period fortepiano, Roland Brautigam is your man, very slow and plangent. I haven’t taken a stop-watch to the contenders, but the slowest I’ve heard, at just over four minutes is the Russian Anatol Ugorsky. You think it will never end

The low-key French pianist Brigitte Engerer (1991) achieves an unsuspected intimacy in this piece, turning it into a quiet conversation between two new acquaintances who might, or might not, be getting to know each other a lot better. The uncertainty is beautifully conveyed.

Another cogent alternative to the Lang Lang machine is the German-Japanese pianist Alice Sara Ott (2010) combining delicacy with insistent quest, as if she is personally trying to crack the enigma of whether Beethoven was really in love with Therese, Elise, whoever.

When it comes to Bagatelles in general, the young Alfred Brendel is very hard to beat. Spotted by the American Vox label in early 1960s Vienna, he set about recording the complete Beethoven piano works with very little by way of producer guidance or interference. The results can be variable and the sound in the concertos leaves much to be desired, but in the sketchy and lighthearted Bagatelles Brendel gets just the right blend of flamboyance and fidelity.

Beethoven had a German name for his Bagatelles – ‘kleinigkeiten’, or trivialities. That’s a considerable understatement. He used the Bagatelles to try out new ideas and styles, some more rewarding than others. The first in this set is the best known but the real nuggets are in the fourth and especially the sixth, where he lets fingers and fantasy fly loose. Brendel recorded the set twice more, but never with the same devilment and cockiness.

An alternative approach is that of Glenn Gould who treats each Bagatelle as if it is either a masterpiece or a timebomb. You expect to hear ticking beneath the sixth so tentative is Gould’s touch, though he sings along quite pleasantly.

At the high end of the scale of adorable is the Barcelona pianist Alicia de Larrocha, who recorded the Bagatelles for Decca in 1979. Less than five foot tall and with a smile that concealed a will of iron, she conjured a highly personal tone in whatever she played. Under the very small hands the Bagatelles sound huge and but forbidding, but engaging all the same.

Two other accounts that I find appealing are Stephen Kovacevich (1977) and Mikhail Pletnev (1997) the first  making them sound so easy as to be hardly worth playing, and the latter delivering the frivolities with the weight of sermons on the mount. Fascinating contrast.

The variations opus 34 need not detain us long, being a less entertaining companion to the Bagatelles. Wilhelm Kempff (1972) despatches them with something between great ease and mild contempt – and that could be as good as it gets. A very early Claudio Arrau set (1942) is disabled by cardboard-box sound; the gifted Welshman Lyr Williams (2015) is charming but a tad too slow. He succumbs to a tendency in the English-speaking world to make the original theme sound like a Methodist hymn, which it can’t possibly have been.  German artists place it more in the Bach-Luther mode, which was also alien to the Catholic-born Beethoven. Maybe he was just trying it out for size.

Virus toll, week 3: these we have lost »