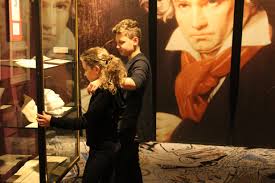 Who was the genius Yakov Shapira? On the windy side of Ludwig van B

Ever wonder why Beethoven wrote so little for instruments other than piano and strings? Where Mozart composed for any bidder from oboe to glass harmonica, Beethoven kept his eye on the mainstream. Mozart, being gregarious, met a broad variety of working musicians. Beethoven was going deaf and could never contain his contempt for flattery or a false note. These are probably the reasons for his lack of interest in wind and brass instruments, but we cannot be sure.

The exceptions are, without fail, interesting. They begin with the 1800 horn sonata, written for a tour he took with the Czech horn star Johan Wenzel Stich, who used the stage name Giovanni Punto. A senior soloist much admired by Mozart, Punto composed 16 horn concertos and 21 horn quartets. By the time he met Beethoven, near the end of his life, he required external stimulus from a younger musician. Beethoven knocked off a horn sonata. The pair first played it on April 18, 1800 at Vienna’s Burgtheater. Beethoven later claimed he wrote the horn part the night before and made up the piano accompaniment as he went along. After a repeat performance in Budapest, there was a falling out and Punto called off the rest of the tour. Of the sonata’s three movements, the second is just over a minute long – a sign, perhaps, of Beethoven’s impatience and disinterest.

Two recordings dominate a limited discography. Dennis Brain‘s 1944 Abbey Road session with Denis Matthews at the piano is austere in acoustic and approach. The full glory of Brain’s horn is absent in wartime conditions. Matthews has a quick fingers and a faintly pedagogic manner. The pair sound like they can’t wait to get to the pub.

Thirty years later, the LSO’s freewheeling Australian horn Barry Tuckwell gave one of those performances that are intended by record producers to be ‘definitive’. The emigré Russian pianst Vladimir Ashkenazy kept Tuckwell’s exuberance in check and the result is less flamboyant than I remember from his concerts, though by no means wallflowery. Tuckwell is always larger than life.

Beyond the star names, there are treasures to be found in the 1951 playing of the Russian-Jewish virtuoso Yakov Shapiro, accompanied by the rising Emil Gilels. Shapiro was old-school with vibrato as broad as the Moscow River and Gilels evidently warmed to his style. The sound is Red Army roughhouse but the humanity soars. For the richest sound on record go to the German virtuoso Hermann Baumann and the former Berlin principal horn Radovan Vlatković. Both are pin-perfect and clean as a whistle. Personally, I’ll take Shapiro.

Not many people know that Beethoven wrote a movement for an oboe concerto. It is mentioned by Haydn in a letter while Beethoven was his pupil. A sketch survives in the British Library and reconstruction was made in 1981. It was recorded with a Dutch chamber orchestra by Jan Willem de Vriend and sounds, as you’d expect, like a piece of homework to show what the student knows of the instrument’s capacities.

Not long after this peripheral piece Beethoven wrote a quizzical little trio for two oboes and cor anglais (the opus number of 87 is misleading). There is every reason to suspect the trio was commissioned by amateurs since Beethovens keeps the run slow and the shifts manageable. There is not a lot of substance to the music, with most of the fun to be found in a skippy little finale. Among the available recordings you have a choice between a sobersided reading led by the Swiss oboe virtuoso and composer Heinz Holliger and a playful runaround with the Frenchman Francois Leleux.

This insignificant composition led directly to one of Beethoven’s most irresistible confections, his set of eight variations for two oboes and cor anglais on Mozart’s aria “Là ci darem la mano” from the opera Don Giovanni. Set Beethoven loose on Mozart and he’s like a kid opening a bag of sweets, letting all the different flavours fall out on the table and rearranging them, time after time, in a different order. The virtuoso clarinet Sabine Meyer leads the field, with Wolfgang Meyer and Reiner Wehle, in a straitlaced 2005 reading of delicate poise and beauty. Leleux, with Paul Meyer and Gilbert Audin, are like three lads on Saturday night, wilder by far and up for anything. The winds of the Berlin Philharmonic sound like pen-pushers by comparison.

Still in the 1790s, Beethoven wrote a trio for clarinet, piano and cello, one of his most endearing ideas. It’s often known as the Gassenhauer trio because its third-movement theme was whistled by delivery boys down the lanes (Gassen) of old Vienna, if that’s what you’d like to believe. The same melody was exploited by Hummel and Paganini, and it’s not much to write home about. But Beethoven gives it heft and suppleness and the best players have an absolute ball with it.

Likewise, do not bother with the so-called clarinet trio opus 38, which is nothing other than a skimpy reduction of the glorious septet, opus 20. If you’ve heard the original, you won’t be satisfied by this, even in as accomplished a reading as Karl Leister‘s with Matthias Moosdorf and Olga Gollej.