Exclusive: Rotterdam made that amazing Beethoven 9th without rehearsal

Slipped Disc has been in touch with the team behind the Rotterdam Philharmonic’s sensational Beethoven 9th, played by musicians who are self-isolated in their homes.

We hit them with some of your questions.

SD Whose idea was it, and why Beethoven 9?
RP The Rotterdam Philharmonic Orchestra has a department called: CreAtions. We create and produce new formats for the orchestra to find and engage new audiences for our concerts. Together with our marketing department we came to this idea. Beethoven 9 is a piece that stands for unity and realizing we are all one in this time. That if we stand together we can overcome. I think it’s a message needed today more than ever before.

SD How did you decide the number of players?
RP We asked the musicians to join, the ones that were available at last-minute notice. More wanted to but we had a really tight schedule.

SD What technology did you use for recording?
RP: The video might look ‘easy’ but its not. We used really professional hard and software, since we also have to protect the level of recording that we put of there Rotterdam Philharmonic Orchestra. Besides that we believe that the quality is part of the impact a message like this has.

(We asked Mike for further specifications). Mike adds: In general, what we do is we pre-produce a click-track which the musicians play to. Keep in mind that you have to think about tuning and intonation. Then we put all those videos in sync and work on the sound with professional studio software and equipment. It is a pity to give away more because it might mean it take away a bit of the magic. But we want to give everybody the possiblity to enrich the world with great music.

SD How long did it take to edit?
RP: We just had a week to make it all work, from idea to production to result. But lets put it this way: we hardly slept that week.

SD How many rehearsals did you have?
RP The individual level of the musicians of the orchestra is very high, we had no rehearsals but our musicians always take responsibility and made sure they did what was needed to be able to contribute on this level.

SD Was there a patch-up session?
RP We worked very hard in both pret as well as post production to come to this result.

SD You are world stars now. What’s your next release?
RP Although we are very pleased with the ‘success’ of the video we are much more pleased with the endless feedback we received. People from all over the world that found some comfort in the music that we all love so much. These messages and reactions keep us going and make us feel thankful and realize everybody can contribute in these dark days when it is done from the heart! A creative mind never stops!! So yes, we might have some new exiting ideas that we would love to share with the world soon! 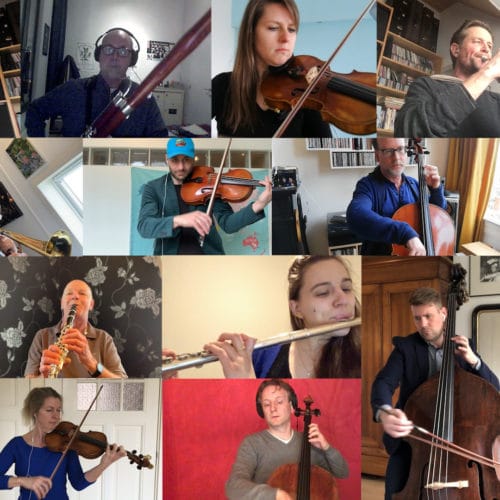