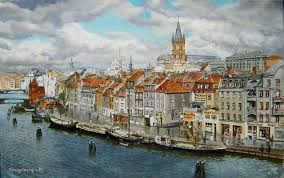 Bolshoi announcement:
On February 25 in Kaliningrad the formal groundbreaking ceremony for the new Bolshoi branch to be built there took place at the construction site of the culture cluster on Oktyabrsky Island, followed by a gala performance of the Bolshoi Choir, Orchestra, and Opera and Ballet soloists at Yantar Hall in Svetlogorsk, Kaliningrad Region.

The Bolshoi Director General Vladimir Urin, Russian Minister of Culture Olga Lyubimova, Governor of Kalinigrad region Anton Alikhanov, director of State Tretyakov Gallery Zelfira Tregulova, president of Social and Cultural Projects Foundation “National Cultural Heritage” Natalia Volynskaya attended the events. The branch in the country’s western most region will become the first in the history of the Bolshoi. It is planned to complete its construction within the project of a cultural-educational and museum complex (including branches of the Central Music School of Tchaikovsky Conservatory, Tretyakov Gallery, Bolshoi Ballet Academy, music school, student campus, housing for artists and tutors) in Kaliningrad by 2023.

Kaliningrad is the former Königsberg, capital of East Prussia, conquered by the Russians in January 1945 and occupied by them ever since.

When the United Nations proclaims that ocupation of territory taken in war is illegal, why does that not apply to Russia?

Or, for that matter, China (Tibet) and Turkey (Cyprus)?

« Stand by for Fidelio blast