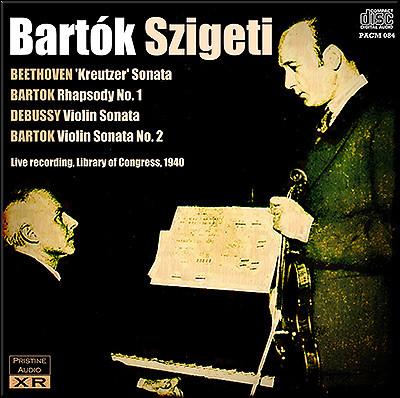 Beethoven’s sonata for the excluded

Sonata for violin and piano no 9, opus 47, ‘Kreutzer sonata’

On the morning of April 16, 1803, Beethoven bumped into a visiting aristocrat and his physician on a Vienna street and invited them to join him at a a rehearsal of one of his early sonatas that had been transcribed for string quartet. ‘We met a number of the best musicians gathered together,’ wrote the doctor, ‘such as the violinists Krumbholz, Möser (of Berlin), the mulatto Bridgethauer who in London had been in the service of the Prince of Wales.’

This is the first known appearance in Beethoven’s life of George Augustus Polgreen Bridgetower, a half-Caribbean, half-German violinist. His father, who claimed to be an African prince sold into slavery, was a valet in the Esterhazy household where Haydn was a musician. George, born in 1778, was taken at nine years old to perform (like little Mozart) in Paris and London, where the Prince of Wales (later George IV) took a liking to him and paid for his volin lessons. Aged 23 or 24 he set off on a European concert tour, arriving in Vienna as the tress were coming into bloom.

He must have been the first person that Beethoven met who was of African origin and the composer liked him on sight. After playing a few pieces together he composed a violin-piano sonata, using a movement he had written the year before as a finale and adding other bits up to the last minute. ‘Bridgetower had to play the marvellously theme and variations in F from Beethoven’s manuscript at the concert,’ we are told, over the shoulder of the composer, who played the piano part. In the midst of the premiere, Beethoven jumped up from the piano stool and cried ‘Noch einmal, mein lieber Bursch (once more, my dear boy!)’ holding down a piano pedal while the violinist repeated a passage at bar 18. We have this reminiscence from Bridgetower’s undated inscription in Beethoven’s original manuscript. At the end of the concert, Beethoven gave Bridgetower his tuning fork (now in the British Library) and named the sonata after him, but the mutual delight did not last much longer.

The pair went off to a bar where, after a few drinks, Bridgetower made a disparaging remark about the morals of a girl whom Beethoven loved. The composer took offence and struck Bridgetower’s name off the dedication page of the new sonata, replacing it with that of the bland French violinist Rudolph Kreutzer. Bridgetower returned to England, earned a music degree at Cambridge, married a London girl and lived to the age of 81, regretting to the end of his days the drunken remark that cost him a place in posterity. Was there any racial predujice in Beethoven’s over-reaction? Given his choleric nature, probably not. He regularly cut off relations with people who said the wring thing.

The so-called Kreutzer Sonata went on to become one of Beethoven’s most popular parlour works, commemorated by Leo Tolstoy as the title of a novella of sexual envy and by Leos Janacek as an extra-marital string quartet.

The sonata does not, for the most part, display Beethoven at his best. The finale is barely fit for purpose and the opening movement is soupy to a fault. It is in the central theme-and-variations which Bridgetower so enjoyed that the work transcends its outer limitations, achieving a form of communication betwen the two soloists that somehow draws in the audience as a third party. It’s a remarkably interactive work.

Among 100 recordings, Jascha Heifetz and Brook Smith set a cracking speed which conjures up the improvisatory genesis of the piece and sets the bar so high that few can match it. Heifetz often gave the impression of finding Beethoven too easy. His lack of awe is somehow apt for the Kreutzer Sonata. This ranks as my benchmark recording against which others are measured.

Jacques Thibaud and Alfred Cortot, recorded in the Salle Pleyel in May 1929, go for a more contemplative conversation, respectful, wistful, almost a dissertation on the nature of friendship. Yehudi Menuhin and his sister Hephzibah (1934) are showy, squeaky and immature.

The first truly indispensable recording is the one made at the Library of Congress in Washington DC on April 13, 1940, by two Hungarian musicians of uneven temperament, the violinist Josef Szigeti and the pianist and composer Bela Bartók . Szigeti had already left his homeland as a political exile, and Bartok was about to do the same, settling in New York in October that year. Their Congressional recital consisted of Bartok’s second sonata (1922), the Debussy sonata (1917) and Beethoven’s Kreutzer. In the last half-minute of the opening movement, there is a whispering hush of alienation and displacement that no-one else has ever found so emphtically in the score. Bartók is revealed as a pianist of both sensitive alertness and deep introspection. One hardly dares breathe through the whole of this performance. 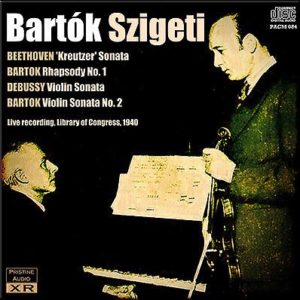 Of the many estimable pairings in this work, Schneiderhan-Kempff, Oistrakh-Oborin, Grumiaux-Clara Haskil and Szeryng-Rubinstein set the tone in the 1950s and 1960s. Itzhak Perlman and Vladimir Ashkenazy (1974) lead the way for the next generation. The incomparable Nathan Milstein performed it in the last recital of his life in Stockholm in July 1986, with Georg Pludermacher at the piano. At 82 years old his technique is unimpaired and his expression uplifting. He once told me that he never gave more than 30 concerts a year in his life, in order always to bring something fresh to hs public. I attended his farewell tour that year and will never forget his joy at playing, or his willingness to play encores so long as there was still one hand clapping.

« Has anyone seen Edvard Grieg?

A centenary season must be full of ghosts »