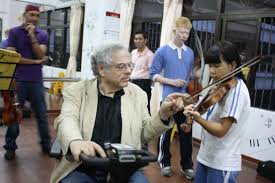 From Richard Morrison’s column in the Times:

…I expressed my fervent belief that teaching children to read music is the key that opens up everything.

First jolt: the music director of Arts Council England (ACE), no less, vehemently disagreed with me. Musical literacy doesn’t matter much, she declared. Second jolt: in the ensuing discussion not a single person spoke in my favour. More than 100 people were in the room, all engaged in running orchestras that depend on instrumentalists who can sight-read to an incredible level, and not one agreed that teaching children to read music was a good idea.

After the event I had coffee with someone in the audience. “Of course nobody sided with you,” she claimed. “Everyone here depends on ACE subsidy. Nobody will contradict publicly what the ACE music director says.”

So true. So damnably true.

« Everyone thinks this is the best ever Beethoven Fifth. Er, everyone?

This cellist comes with handlebars »