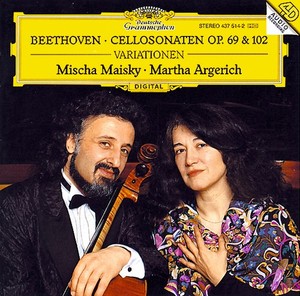 What Beethoven did in his spare time in Berlin

For an instrument that he never played, Beethoven wrote a lot for the cello – five sonatas for cello and piano and two of his most popular sets of variations. The earliest sonatas were written in Berlin in 1796 before he was fully settled in Vienna. The cellist was Jean-Pierre Duport, the Prussian King’s teacher, and Beethoven played the piano part.

The opening is uncharacteristically reticent, presumably to allow Beethoven three minutes or so to get the measure of his partner and the temperature of the room before he lets fly with a fast allegro. The moment you hear the big tune, you know that it is susceptible to infinite variations, that it will take your where mind wherever it wants to go.

Every cellist I have asked recommends Pablo Casals in the sonatas – but which Casals? There’s his earliest recording in 1939 with Mieczyslaw Horzowski, brimful of vigour and almost unrecognisable as the avuncular Casals of living memory. Both of the cellists I have consulted – the soloist Steven Isserlis and the Houston Symphony principal Brinton Smith – listen to this recording above all others.

In 1951, with Rudolf Serkin at the piano, Casals is more the smiling cellist we recognise, indulgung us with little grunts of satisfaction at the composer’s genius. Ten years later, with Wilhelm Kempff, he’s monumental, indefatigable, and still exploring new lines.

Pierre Fournier and Friedrich Gulda set out on a journey that is full of fantasy, each encouraging the other to pause and admire the pterodactyls and unicorns. I find this pairing captivating and far preferable to Fournier’s subsequent cycle with Kempff.

Pieter Wispelwey and Paul Komen (1991) in a Protestant church err to my taste on the side of austerity; others, however, find their restraint refreshing.

There is a new generation, led by Leonard Elschenbroich and Alexei Grynyuk (2019), that knows no speed limits and no fear. Really fast at times, but exhilarating.

The second sonata is more eloquent than the first, and the freedoms greater. Piatigorsky with Schnabel could be in different cities for all that they acknowledge one another.

Richter and Rostropovich can barely agree who goes first.
Jacqueline Du Pre and Daniel Barenboim sound edgy, start to finish, both interpretation and studio sound leaving an uneasy feeling. Anner Bylsma and Jos van Immerseel take it gently, low volume and emotion, a fine contrast with all the rest

And then there is this 1990 Brussels recording which sounds like a breakfast conversation between old pals Mischa Maisky and Martha Argerich. It’s too early in the morning to interrupt so each allows the other their full mellifluous say over coffee and croissants. One of the most human recordings you will ever come across.

While working on these sonatas, Beethoven attended a performance of Handel’s oratorio, Judas Maccabaeus, the first work of western music to feature a Jewish hero. The young comoser was so taken with its catchy ‘See the conqu’ring hero comes’ that he knocked off a set of a dozen  variations for himself and the king’s cellist, Duport, to take on tour. The very slow eleventh variation is by far the longest, as if Beethoven could not bring himself to end a work that he clearly loved so much.

There are about 100 recordings out there, starting with Gregor Piatigorsky and Lukas Foss in full storytelling mode in 1955, making it all sound like child’s play. The Augustan Zara Nelsova (born Katznelson in Manitoba) is more declamatory, accompanied by Arthur Balsam at Decca’s West Hampstead studios – lovely sound, but a little schoolmarmish for me. Fournier and Kempff really turn me off, playing as if the piece is sui generis, without reference to its origin. It improves around the 11th variation.

Anner Bylsma, a master of baroque style, is delicately decorous in the variations, nicely partnered by Stanley Hoagland. Peter Wispelwey strives a little too hard, I feel, for period correctness, albeit with affecting beauty in the slowness of the 11th. I am very much taken by the sprightly 2015 speeds of François-Frédéric Guy (piano) and Xavier Phillips (cello). There is also much to enjoy in Adrian Brendel‘s gentle saunter with his father, Alfred, and from two young women, Maria Kliegel and Nina Tichman, in the Clara-Wieck-Auditorium, somewhere in unified Germany. But the recording I revert to more than any other in this cherished piece is a 1993 album filler for Deutsche Grammophon by Mischa Maisky and Martha Argerich, both s much at ease with the music and each other.

These things happen at music school »