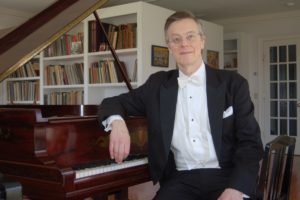 Tributes pour in for the late Peter Serkin

The US pianist died yesterday after a long illness, aged 72.

He was more loved than he ever knew.

It’s hard to see one’s heros falling; now it’s Peter Serkin, may he RIP. I always learned so much being around him. Thanks for the great music-making, for the fierce will and for the uncompromising curiosity. -AG

Pianist Eliane Lust: I was 16 years old when I first heard & met him at the Spoleto Festival Italy where we were both performing. My biggest teen crush ever … all dressed top to bottom in white, handsomest guy there, performing the complete Vingt Regards outdoors with just a short 5 minute (sweat) break in the very middle. Dude. A performance never paralleled since, to be perfectly honest.

Who on earth ends (!) a recital with the Schoenberg Suite Op. 25?
And what an ending it was. Only Peter Serkin could take this piece of perhaps the worst reputation in all of piano music – and bring it across like a rock star.
I was screaming bravo at the top of my lungs after that Gigue not only because I knew it could not be played better but also because, still a student, I knew that this was an altering experience which showed that if you play the music you truly believe in you can make an audience go with you no matter how cuckoo they might find this music otherwise.
In his hands Schoenberg was alive and well – not academic and dour but subversive and witty and infectiously exciting.
That is only one of many memories of his playing that etched themselves already in my student concert-going days.
There was a Brahms D Minor with the New York Philharmonic that I will never, ever forget. And a Brahms B-flat encountered on YouTube which had me glued to my computer like a child. Or a recital at Carnegie Hall ending with an almost blindingly luminous Beethoven “Les Adieux”. How poignant that title is today.

Pianist Sylvia Kahan: Peter was my chamber music coach at Tanglewood, and it’s thanks to him that I was introduced to the beauties and intricacies of Stefan Wolpe’s music. A few years later, I became piano teacher to his children Elena, Maya, and Stefan. I remember how intimidating it was to teach those lessons in a room largely taken up by his father Rudolph Serkin’s music library and Steinway grand. But Peter was always so hospitable, and never failed to praise my teaching. He was a towering musician, and I shall miss his warmth and his remarkable pianism and intellectual prowess.

RIP Peter Serkin.Someone who I heard at Curtis age 18 and didnt forget.Someone who can play stunning Bach and give a Premiere of Carter.Rare sort.

Orchestra administrator Ed Yim: I will always regret never finding a way to program the Reger Piano concerto Peter always wanted to do with one of the orchestras I worked for. I remember when he came to play Hindemieth with Sawallisch and Philadelphia, he was flummoxed by the somewhat old-school ways of dear Maestro Sawallisch and called Manny Ax to say “I thought you liked this conductor? He’s telling me exactly how to play my part.” and Manny said, “Yes, that’s why I love him.” He also eschewed post-concert dinners (he was warm but private), and we got into a ritual over the years of my stopping by during the week to say “You don’t want to go out to dinner this week, right?” and he would say “Right. But thanks for asking” with a twinkle in his eye. What a great artist.

Critic Tim Page: More than any other group, it was Tashi (pianist Peter Serkin, violinist Ida Kavafian, clarinetist Richard Stoltzman and cellist Fred Sherry) that brought Messiaen’s “Quartet for the End of Time” to public attention, presenting it in unexpected places such as the Bottom Line. I don’t think a day went by in 1976 when this didn’t find its way to my turntable. You can hear it all here.

Since Oldie left this world in 2018, I have frequently heard Brahms Piano Concerto No. 2 playing on the car radio. I cry almost every time, just a little bit, as I’m caught off guard thinking of Oldie and Peter in Japan and London having a blast in rehearsals. The photo below is from their Japan performance of the Brahms. I was in the audience.

Oldie wrote his Variations and Prayer Bell Sketch for Peter to play. When he wrote Variations it was in the days of fax and answering machines. I remember that the phone would ring and Dad would shout “No! don’t answer! It’s Pete!“ and sure enough we’d get to hear the first ever readings of sections of the piano piece, that had just been faxed to Peter in the states from our flat in London, played over the phone from NY and recorded onto our answering machine tape.

So much love to the entire Serkin family, extended family, friends and students.

Label owner David Starobin: Peter Serkin passed away today. He was a wonderful musician who touched our lives deeply. Here he is with Lorraine Hunt Lieberson, from a recording session of Peter Lieberson’s “Rilke Songs”. I remember these sessions as if they were yesterday, and will always be grateful for them.

The last baritone to serve as President of the USA »