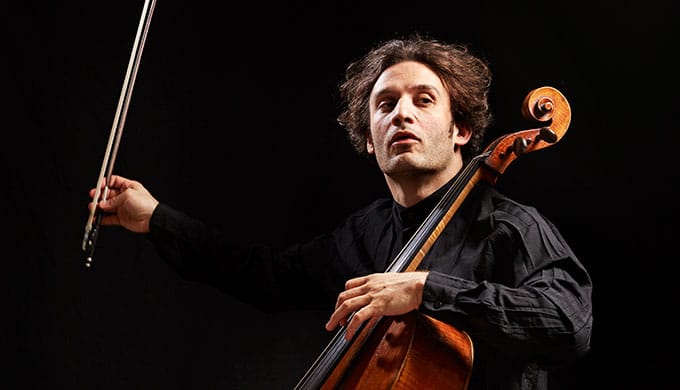 The cellist who conducts with his back to the orchestra

Can a cellist conduct with his back to the orchestra? This was the question I asked when I looked at the programme and saw that the French-German cellist Nicolas Altstaedt was planning to conduct the Scottish Chamber Orchestra, playing the cello while conducting the orchestra.

Orchestras are well able to play without conductors, indeed the SCO is used to playing with only a lead from the first violin. I am reminded of an old friend of mine Andrew Woodburn from Ayrshire who went from being a brass player in the Newmilns Brass Band to principal horn with a leading London orchestra.The orchestra were getting fed up with a famous conductor who was giving them a hard time in rehearsal, so when the concert began they taught the conductor a lesson.

The work began with a horn solo. The conductor leapt on to the podium, raised his baton, gave the cue dramatically and nothing happened! He looked across to Andrew who was nonchalantly polishing his horn. The conductor stomped off the stage. Andrew picked up his horn and began to play and the orchestra followed him. The conductor rushed on to the stage and caught up with the orchestra, at the end Andrew said to the conductor, “we thought we would remind you,we make the music round here”!

Back to the SCO concert. It began with Beethoven’s overture Coriolan. Our cellist conductor conducted with vigour and the SCO played with passion. Nicolas Altstaedt then played – and attempted to conduct – the Shostakovich Cello Concerto No1, written not long after Stalin’s death and now a concert favourite. Altstaedt did turn around and wave them off at the beginning but after that he concentrated on his cello, apart from occasional waves. In a recent interview Simon Rattle said “conducting is one of the great fake professions”! Atstaedt is very lively and very much on top of the music, pulling in every player and setting the pace. He probably did all that in rehearsal. It went fine at the beginning with the four notes that are Shostakovich’s musical signature and he seemed to work well with the SCO. I am now listening to his recording of Shostakovich with the Deutsches Symphonie-Orchester Berlin and I have to say that the SCO compare very well to the Berlin orchestra.

After the interval we were treated to Ramifications for string orchestra written in 1968 by the modernist Hungarian composer Gyorgy Ligeti. Nicolas Altstaedt told us we shouldn’t be afraid of listening to new work and he had been listening to Ligeti since he was 8 years old. I can see it’s clever splitting the strings into two groups and playing them a quarter tone apart, to create a mesmeric effect of soundscape. I have to say it underwhelms me as it did some of the audience I spoke to. Fortunately we finished with Schubert’s great Symphony No 4 known as the tragic symphony. Altstaedt is a very good conductor and a very good cellist but I’m still not convinced you can do both.

Just in: Fourth Italian opera is shut by virus »