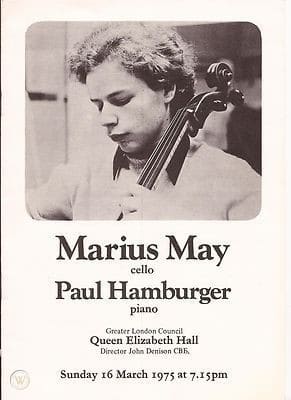 We regret to report the death, yesterday in Jerusalem, of one of the brightest cellists of his generation, the British virtuoso Marius May.

Marius, who was 61, had been suffering from pancreatic cancer. He is survived by two chldren, Amiel and Alma, and by his brother, the philosopher Simon May.

In the mid-1970s, when I acquired the concertgoing bug, Marius shone like a beacon among a rising pack of British cellists – Raphael Wallfisch, Steven Isserlis, Colin Carr, Robert Cohen, Alexander Baillie, Julian Lloyd Webber – who strove to fill the void left by the terrible illness of the irreplaceable Jacqueline Du Pré. Marius was the first among them to have dates with all the London orchestras and a pack of agents and record producers were snapping at his heels.

He made his first record, for Decca’s John Culshaw, at the age of 15.

But, although his mother Maria Lidka was a professional violinist, Marius was a gentle soul, never cut out for the competitive nature of the music business. Bit by bit, year after year, he withdrew from performance. Thirty years ago he moved to Israel.

Eric L Wen, who visited Marius last week, has sent us this account:
Marius was never interested in career success. In fact, he became more than a little disillusioned by the whole marketing machinery that eventually dominated classical musical life. He emigrated to Israel about 30 years ago, and continued his deep devotion to music in the privacy of his own home to the end. He studied scores, practiced The Well-Tempered Clavier and Art of Fugue of J. S. Bach on the piano, and continued to perfect his cello playing. Despite his reclusiveness, his cello playing was better than ever.

Perhaps even more striking than his phenomenal musical gift, was his penetrating insight and clarity about people. He had this uncanny insight even as a teen, when I first knew him. And I don’t know a more loyal friend. I spent four days with him last week in Israel, and even in the final struggle with his horrible disease, he displayed a generosity of spirit, not to mention a keen sense of humor, that was really quite unbelievable. On the day I left Jerusalem, five days before he died, he took out the cello and played a few passages. Despite being laid up in bed and not touching the instrument for weeks, Marius’s inimitable sound, so full of wisdom and intimacy, was still there. It was an unforgettable moment.

He is unknown to Wikipedia, and almost invisible on Google.

Cellists are a nice bunch (mostly). Thinking back to my Wigmore Hall debut in 1977 (groan) – reaction was mixed. What cheered me most afterwards was a call from Marius May, then the most famous young cellist around, who told me in detail what he’d really liked about it. So kind.

UPDATE: The funeral is today at Rishon LeZion. The family will sit shiva this week at his home in Jerusalem.

Eric Wen adds: I remember so clearly when I first heard him in the Haydn C-Major Concerto with the Wren Orchestra in St John‘s Smith Square in the 1970s. I was completely overwhelmed by the sheer eloquence of his playing which really stood out from any other cellist I’d heard before or since.