The Polish pianist has not set foot in the United States since, on 26 April 2009 at Walt Disney Hall, Los Angeles, he swore never to return until America removed its missile defense shield from his country.

The US pianist Zsolt Bognár misses him badly. Zsolt has been listening to an astounding 1994 concert performance of Szymanowski’s Variations on a Polish Theme. He shares his regrets with Slipped Disc:

The night before I played my Suntory Hall debut in 2009, I heard Krystian Zimerman play a recital in the adjacent hall of the same elegant venue. The program included Bach’s c minor Partita, Beethoven’s last sonata, Opus 111, the Brahms Opus 119 set, and a barnstorming performance of Karol Szymanowski’s transcendentally difficult Variations on a Polish Theme—the same work before which, some days earlier in Los Angeles, the pianist hesitated then addressed a message about American missile installations in Poland to a stunned audience. The ensuing performance was tense for audience and performer alike: Mr. Zimerman had announced it would also be his final appearance in the United States.

Meeting him backstage in Tokyo, I found Mr. Zimerman, as I had on many occasions before—from Chicago, to Boston and Cleveland—to be thoughtful and measured in conversation, regal in poise, dress, and manner as he listened. I asked if Los Angeles would indeed be his last appearance in the United States. He replied quickly to the contrary that although he would likely steer clear of major concert circuits, he planned to visit conservatories and universities, and hoped to start a dialogue with students about why he had taken such a stand. To the substantial loss of devoted concertgoers across the country, a prolific musician in his prime would indeed remain entirely vanished from its musical stages ever since.

Krystian Zimerman, a pianist who idolized the similarly elusive Arturo Benedetti Michelangeli, surpassed in some capacities the often superhuman craftsmanship with an artistry all his own, combining pianistic sheen with the warmth of Artur Rubinstein and the dramatic narrative of his other idol, Maria Callas. But to assess Zimerman’s art is not as simple as listening to his catalogue of highly-crafted commercial recordings, which range from almost literal and didactic in his early reading of Schumann’s Concerto with Karajan, to pristine and glowing balance in his cycle of Beethoven Concerti in Vienna with Bernstein, and an intimate and improvisatory freedom in his recent album of the last two Schubert Sonatas.

To hear Zimerman in concert, however, was immersion in dramatic fervor—an entirely different artist with infinitely more colors and sonorities, rhetoric on an operatic scale, and a sense of moment that even seemed to pick up on the energy and response of the venue and audience. His 2002 Brahms recital in Carnegie Hall specifically outdid itself because of the audience present; the final chords were the culmination of an epic journey fueled with exhilaration of an Olympian runner empowered in the final stretch. In concert, his sound shimmered with a brilliant upper register and gem-like clarity. Bass sonorities were massive, even frightening—benefitting from the incredible Steinways he used from his own collection of nearly a dozen, which he also serviced and voiced himself. Zimerman’s artistry on stage breathed, sighed, and thundered with ever-changing power.

Krystian Zimerman’s 1994 Ludwigsburg concert recording of Szymanowski’s Variations on a Polish Theme—a work he never released commercially—not only captures the breathtakingly expanded range of the musician in performance, but is one of the highest pinnacles in the recorded history of the instrument. As a lifelong collector of rare concert recordings, I owned a private copy of this performance since my days as a student; I also recently discovered it from a 2012 upload with comparatively few views given its stature. In it, one witnesses white-hot pianism, nostalgic laments, cathartic declamations, the visionary half-light of early Scriabin, and in the funeral march (from 10:08) there is a crescendo to the most massive and cursed bell-like sonorities imaginable.

The left-hand barrage of octaves at 3:50 is jaw-dropping also for its clarity and momentum. Szymanowski’s wistful rhetoric is present even in the most athletic passages, and in the hands of Zimerman is a revelation of thought and heart. The resignation at 7:30 is reminiscent of Vladimir Sofronitsky, and the ecstatic surges of sound from 13:29 are of vitality unlike any of Zimerman’s commercial recordings. Szymanowski’s piano-writing at 16:10 rivals Liszt’s in Feux Follets, here deployed with beguiling lightness. The fugue from 16:33 is electrifying in its heroic outbursts. The drive to the end from 18:25 is to be heard to be believed.

Krystian Zimerman’s appearances in the United States were already witness to unusual happenings before Los Angeles, with issues ranging from traveling with his own pianos in a climate of heightened border security, to incidents in New York involving the alleged recording of performances by audience members, bringing events to a halt at the request of the performer. On other notable occasions, humanistic and political stands were verbally addressed to the audience regarding specific issues. 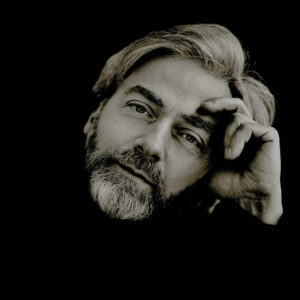 The question of the overlap of politics and music is not new, but here it concerns self-exclusion and the absence of a major artist. Sviatoslav Richter said the two issues were inseparable, citing Don Carlo and Tosca as examples. In Hungarian interviews, Richter even declared his artistic duty as musician to be no different than his patriotic duty—a contradiction indeed from a performer who elsewhere proclaimed indifference to politics and worldly matters. Krystian Zimerman’s illustrious compatriot Ignacy Jan Paderewski faced the question as well: he was a pianist-composer whose consummate fame included his becoming Prime Minister of Poland in 1919, signing the Treaty of Versailles to end World War I.

Aside from our lament at the absence of his gripping performances and artistry, the need for art and humanistic vision in today’s world has never been greater—and the strife publicly decried from the stage in Los Angeles is arguably far greater now. The urgency of Krystian Zimerman’s unique art and message is most effective through its presence rather than its absence. It’s time for a return.