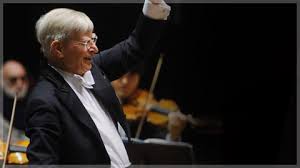 Members of the Orchestre de Paris refused to wear concert gear last night ‘in solidarity with striking members of the company’.

Their stance was announced by microphone to the audience ahead of the concert, cnducted by Herbert Blomstedt.

Mr Blomstedt, 92, was appropriately attired, as ever.

Ex-dancer is named conductor in residence »