The organiser of the Dresden opera ball has issued a statement denying that Yusif Eyvazov demanded the removal of the Armenian soprano Ruzan Mantashyan due to her national origin.

The statement does not make clear whether or not she has been removed at all, and for what reason. The report of Eyvazov’s demand for her removal, which appears to have stemmed from her agency in Paris, cropped up from several other sources.

Here’s the Dresden statement, as circulated by Eyvazov:

SemperOperaball firmly rejects accusation against Yusif Eyvazov The organisers of SemperOperaball firmly reject the accusation that the singer Ruzan Mantashyan will not perform at the 15th SemperOperaball on 7 February 2020 due to her nationality. Prior to this, it had been alleged that the Azerbaijani tenor Yusif Eyvazov, who will sing at the gala in Dresden’s Semper Opera House, had refused to appear at SemperOperaball together with the Armenian artist on the grounds of her nationality. The artistic director of SemperOperaball, Hans-Joachim Frey, however, strongly condemned the accusation as an insinuation. At no time had there been a contract with Ruzan Mantashyan for a performance at SemperOperaball on 7 February 2020. Nor did Yusif Eyvazov ever make the collaboration with a fellow singer dependent on her origin. However, it is now assumed that there may have been misunderstandings in communication with Ms Mantashyan’s agencies. “The appeal of SemperOperaball lies precisely in the fact that for many years now its programme has featured artists in a wide variety of constellations from the most diverse countries of origin, including Armenia,” said Hans-Joachim Frey, adding that “the ball is known for its cosmopolitanism. Statements of a different kind are not true. Yusif Eyvazov is held in high esteem, especially as a cosmopolitan artist and honest man.” P.S.: Dear All, as an Azerbaijani, I have a strong view on the political situation between Armenia and Azerbaijan. But my political opinion has never and will never influence my work on stage. I have worked with Armenian colleagues like Maria Guleghina and Gevorg Akopyan and others . So, please – don’t change the facts and don’t believe those who do!STOP PROVOCATION!! 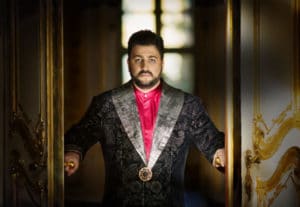 But there are some aftershocks. This, for instance, from the Prague-based opera critic Dusan Bogdanovic:

Regardless of Semperoper Ball topic, Mr. Netrebko’s response to a comment on his Instagram post in which he ridicules Ms. Mantashyan as a unknown who will finally be known after this scandal, deserves a full condemnation, truly appalling pic.twitter.com/ZhvfvCeegL