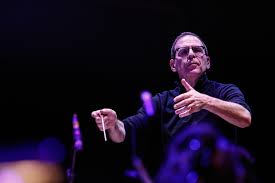 Breaking: UK conductor is resuscitated on stage after fainting in concert

An ambulance was called and the conductor received heart massage and other emergency interventions on stage before being rushed to hospital in Luxembourg where his condition is said to be stable.

This was Ziegler’s first appearance in Luxembourg. He works regularly in studio with the LSO and LPO and in concert with the RPO and the BBC Concert Orchestra.

UPDATE: We’v e received this encouraging word from his wife, Nicky Webb: ‘Robert (to whom I am married) fainted on stage. That’s all. The doctor in the house started CPR though when he got to hospital it was confirmed his heart was just fine and he’d simply fainted, probably due to standing for so long during the cues he wasn’t conducting coupled with low blood pressure.’