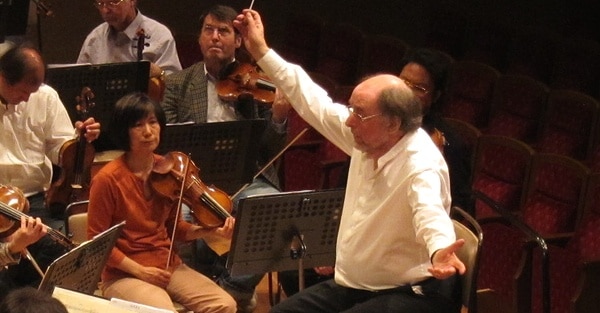 A Beethoven a Day: Have you got a second?

2nd symphony, opus 36 (1802)
If a second novel seldom lives up to the promise of the first, how much more so with a symphony? In some ways this is the most problematic of Beethoven’s symphonies. Coming after the explosive promise of the first symphony, the work seems to go neither forward nor back. After a ruminative opening passage, there’s a lot of bombast in the first movement, some gentle relief in an unusually long Larghetto and two snappy allegros to end, but nothing much to whistle at the bus stop. Was Beethoven’s mind elsewhere? He wrote the symphony while suffering the first symptoms of encroaching deafness. Maybe he keeps writing forte to see if he can hear himself think. One US musicologist has ventured a theory that the belched opening of the finale is a reference to the composer’s stomach problems (give it a rest, doc).
One of the most scintillating performances is delivered by Sir Thomas Beecham, who generally disparaged Beethoven’s bombast, preferring the lightness of Haydn and Mozart. His ultra-classical 1957 interpretation is delightful.

Herbert von Karajan, in a contemplative 1953 recording in London, takes his time with the introduction to draw out anticipations of later symphonies, including the Ninth. For Karajan this, far more than the first symphony, is the gateway to Big Beethoven.

At the polar opposite, this is the symphony with the most to offer period-instrument performers. My friend Stephen Pollard, musically aware editor of the Jewish Chronicle, swears by a 1986 recording from Roger Norrington and the London Classical Players: ‘I remember the visceral excitement of hearing this when it came out – it was, to use that hackneyed phrase, like hearing the piece for the first time. But time hasn’t diluted the sensation. It remains as fresh, vibrant and compelling a recording of anything as I’ve ever heard. And the climax of the first movement still brings goosebumps!’

My memory of Norrington in the 1980s is how, during coffee breaks, he would take at least half the players into the control room to listen and democratically discuss how they were fulfilling what Beethoven wanted. This performance is pretty captivating.

John Eliot Gardiner with his Orchestre Revolutionnaire et Romantique piles on plenty of pressure to no great interpretative purpose and with frequently unpleasant wind noises.

Among the big beasts, avoid Toscanini: too hectic and terrible sound.

Not Furtwangler’s finest half-hour, either, in a 1948 London session with the Vienna Philharmonic.

Simon Rattle with the Vienna Philharmonic (2002) and Adam Fischer with the Danish National Orchestra (2019) find middle ground where historical fidelity coexists with agreeable modern sound to deliver a portrait of Beethoven in excruciatingly painful transition.

NB: By way of a wild card, a Philadelphia reader Michael Carasik calls my attention to a 2014 performance by the Chamber Orchestra of Philadelphia conducted by Ignat Solzhenitsyn, son of the Nobel-winning Russian novelist. Since pretty much everything is on Idagio, I had to give it a listen and agree – the tempi are simply organic.