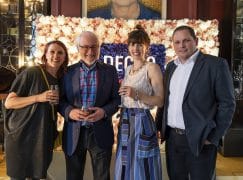 The publishing arm of Decca – a bigger moneyspinner these days than the recording business – has signed three rising talents.

If you’ve heard of them, say so.

Decca Publishing is thrilled to announce the signing of three exceptional artists: award-winning film composer Amelia Warner; singer, songwriter and producer Kieran Brunt; and experimental producer and DJ Laurel Halo. Each of these artists is a leading voice in their field, creating music which is pushing the boundaries of contemporary composition.

Amelia Warner began her music career as a singer, writer and collaborator under the name ‘Slow Moving Millie’. She was widely acclaimed and enjoyed great success as a performer (her voice can be heard on the 2011 John Lewis advert) but became increasingly sought-after as a TV and film composer, releasing her first soundtrack Mum’s List in 2016. Most recently, she penned the score for historical drama Mary Shelley, starring Elle Fanning and Douglas Booth – earning a nomination as Discovery of the Year at the World Soundtrack Awards and winning Breakthrough Composer of the Year at the International Film Music Critics Association (IFMCA).

Kieran Brunt is a London-based singer, songwriter, producer whose music crosses a broad range of genres. He is in demand as a collaborator and has worked with artists including Nils Frahm, Terry Riley, Anna von Hausswolff, Luke Howard and The King’s Singers. He established the electronic duo ‘Strange Boy’ with composer and producer Matt Huxley, and in 2016 he created the 12-strong vocal ensemble ‘Shards’ – the group released their debut album earlier this year. Entitled Find Sound, the recording was praised by DIY Magazine for its “mesmerising soundscape that’s unlike anything you may have heard”.

Michigan-born and Berlin-based artist Laurel Halo completes the trio of new signings to Decca Publishing. Her work ranges from live performance and DJ-ing to composing albums and scores. In 2012 she released her acclaimed debut album Quarantine, a powerful juxtaposition of raw vocals and cold electronics, named ‘Album of the Year’ by Wire magazine. It was followed by three LPs: 2013’s Chance of Rain, 2015’s In Situ and 2017’s Dust (featuring Eli Keszler, Julia Holter, Lafawndah and Klein). Halo’s body of work also includes Still Be Here, a collaborative installation piece starring the Japanese virtual popstar Hatsune Miku, and the score to 2018 documentary Possessed, directed by the Dutch design group Metahaven. Her latest project is the mini-LP Raw Silk Uncut Wood, which is a classically-inspired collection of instrumental tracks.