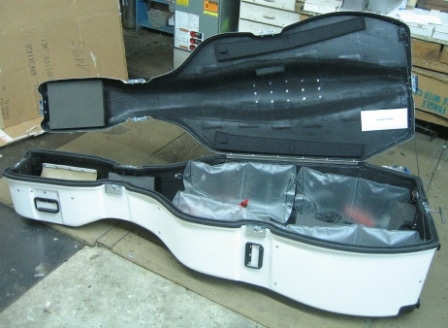 The Editor of the Financial Times has inside track on how Carlos Ghosn jumped bail in Japan:

I can read a million words on how car boss Carlos Ghosn escaped 24 hour surveillance in Japan to flee by private jet to Lebanon. Beirut sources saying he hid in a box designed for a musical instrument. Double bass, presumably.

He’s not the first to do so.

The Soviet spy George Blake escaped Britain in 1966 inside a bass case.

He must have flown by private jet, since no airline would board a doublebass these days.

And what did they do with the doublebass itself – leave it on the tarmac?

More from the Mail:

Lebanese news channel MTV reported that a ‘paramilitary group’ had posed as musicians hired to perform at Ghosn’s home to smuggle him out under the noses of the Japanese authorities.

He was then flown to Beirut via Turkey.

MTV reported: ‘The band entered his home in Japan under the guise of a band for a Gregorian dinner, then returned and exited after the party’s logical time had passed.

Gregorian, as in chant?

More likely Georgian, as in Stalin.

« Mariss Jansons told me: Conduct opera before you head an orchestra

What we owe to Harry Kupfer »