What happens when the Spanish assistant conductor takes over

Here’s the Slipped Disc review of the latest concert in the CBSO100 year. All reviews are readable here: 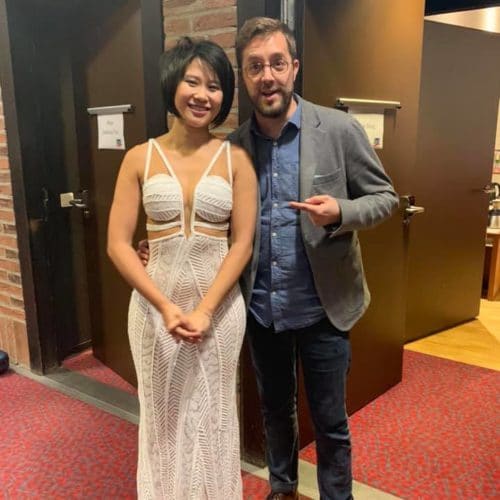 CBSO at Symphony Hall ★★★★
Nostalgia, anti-colonial anger, maternal tenderness and the unbuttoned joy of dance – Xavier Montsalvatge’s 5 Canciones negras packs a lot into its twelve minutes. The Spanish mezzo-soprano Clara Mouriz sang three of the Catalan composer’s “Five Negro Songs” on Radio Three last week in their original 1945 form with piano accompaniment. Here in the composer’s later orchestral version her vivacity, exuberance and ability to bring the poetry’s vivid scenes to life with vocal colouring was thrilling. There are gains and losses between the two versions.
In Cuba in a piano the singer rails against the Americanization of post-war Cuba, when “Si” was replaced by “Yes”, the last word of the song flung out defiantly by Mouriz, was much more biting with just the piano. But the orchestral Habanera was gorgeously sultry and Mouriz’s lullaby, with muted orchestra throbbing away like a maternal heartbeat, was irresistible.
The CBSO’s assistant conductor Jaume Santonja Espinós (pictured with an unidentified pianist) chose this work and the Suites 1 & 2 from Falla’s ballet The Three-Cornered Hat – where he instantly communicated his love of them to us – and the CBSO eloquently conjured up the dances’ stamping rhythms, heat, humour and hectic gaiety. Prokofiev’s Symphony No. 7 is wonderfully deft and deceptively simple, with dark undertones; like Dickens’ writings on childhood. Espinós balanced ebullience, the lashings of percussion and the final madcap gallop, with pathos; its quiet ending with death as the winding down of a music box mechanism. Best to pass over a crudely deafening performance of Rimsky-Korsakov’sCapriccio Espagnol.
Norman Stinchcombe