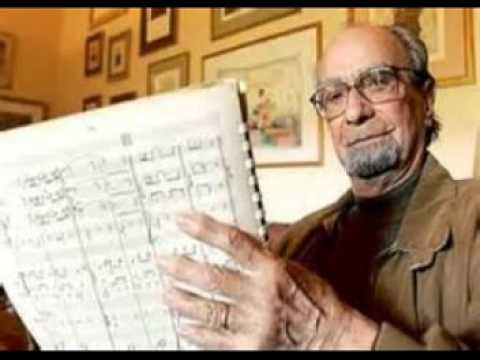 The Chilean composer Juan Orrego-Salas, founder of the Center for Latin American Music at Indiana University, died on Sunday at Bloomington, Indiana.

A student of Aaron Copland at Tanglewood, he lived in the US from the 1950s and enjoyed extensive performances there.

His death is overshadowed by his country’s worst crisis since the military coup of 1973.

Juan Orrego-Salas (1919-2019)
Juan Orrego-Salas, world-renowned classical music composer, professor emeritus of composition and Latin American music scholar, died on November 24, 2019, in the city of Bloomington, Indiana, where he emigrated from his native Chile in the early 1960s. He was 100
years old.

As Founding Director of the Indiana University Latin American Music Center and Jacobs School of Music’s faculty, he promoted a deep understanding of Latin American music and taught music composition to hundreds of aspiring composers from around the world, many of whom currently lead meaningful careers as composers and teachers. Throughout his prolific life, Juan Orrego-Salas composed over 125 works for a myriad of templates. His catalogue includes six symphonies, two operas, several oratorios, a mass, many choral pieces, concertos for piano, violin and cello, chamber works and compositions for unaccompanied instruments, including one for bandoneón, the concertina-like instrument synonymous with tango music. His extensive creative output is characterized by an adherence to impeccable formal designs, vocal-like lyricism, and inventive musical procedures that stem freely from different time periods.

Among many honors he received, Juan Orrego-Salas was awarded the Premio Nacional in 1992, the highest recognition conferred by the Chilean Government to artists, writers, scientists, and historians, and the Premio Interamericano de Cultura Gabriela Mistral granted to him in 1988 by the Organization of American States in Washington D.C. Other distinctions included fellowships from the Rockefeller and Guggenheim foundations as well as commissions from the Koussevitzky, Coolidge, Wechsler, and Stieren foundations.

Born on January 18, 1919 in Santiago into a politically-engaged and arts-loving family, he studied composition with Pedro Humberto Allende and Domingo Santa Cruz in Chile and later on with Randall Thompson and Aaron Copland in the United States. When he was appointed faculty at the Indiana University Jacobs School of Music in 1961, Juan Orrego-Salas was already a major influence in his native country. He was editor of a major music journal, director of a choir and founder and first director of the Music Department of the Universidad Católica de
Chile, the same institution that granted him a Diploma in Architecture in 1943 and an Honorary Doctorate in 1971. He retired from teaching in 1987 —after 26 years of service to Indiana University— and continued creating intensely until 2007.

« Just in: Dudamel to play the Olympics

Peter Gelb will end his career at the Met »