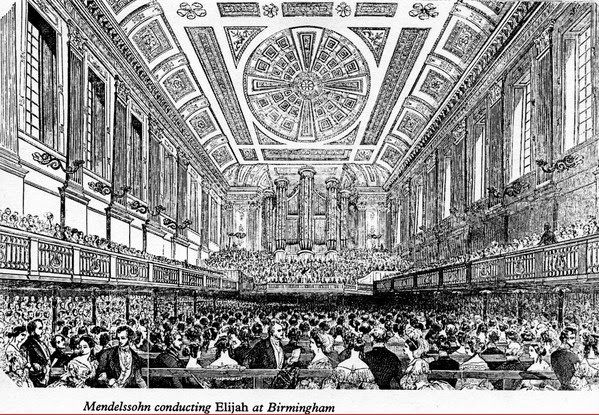 Elijah has a momentous homecoming

Review by Christopher Morley for SlippedDisc/CBSO100.

Birmingham owns Mendelssohn’s Elijah. The oratorio, one of the undoubted choral masterpieces of the 19th century, was premiered at the Town Hall under the composer’s direction in 1846, and ever since that triumph both the city and the work have been synonymous with each other.

And no time more so than at the present. Last week the CBSO Chorus received an immense ovation when they performed it in Monaco with the Monte Carlo Philharmonic Orchestra under principal conductor Kazuki Yamada. Yamada is also principal guest conductor of the CBSO, to whom he brought the Chorus back home last night for a truly tremendous account of the work (never mind the fact that we over-ran 20 minutes more than the advertised length, this was bliss).

His conducting persuasive, supple, elegant and expansive, Yamada secured a reading which was at once dramatically paced and richly reflective. Julian Wilkins’ Chorus spat venomous diction as well as bringing warmth and devotion in their fear of the Lord, and balances between chorus and orchestra were exemplary, dynamics judiciously judged; my only cavil (don’t beat me up, chaps) is that the tenor tone thins out below mezzo-forte, but this can be worked on.

We also had an eloquent solo quartet. Keri Fuge brought an operatic fervour and frequent radiance  to her numbers, Karen Cargill had an almost Lady Macbeth-like rabble-rousing interplay with the chorus, and Robert Murray brought much ardent sweetness to his contributions.

As Elijah Matthew Brook was simply outstanding. No stentorian stand-and-deliver Old Testament prophet here, but a portrait of a man vulnerable, capable of sardonicism when he taunts the followers of the false god Baal, and one full of self-doubt. His “It is enough” was heart-stopping, aided by Eduardo Vassallo’s mournful cello obbligato.

And all Vassallo’s colleagues in an on-fire CBSO brought Mendelssohn’s surprisingly operatic score to vivid life. What would it have been like to review the premiere of this amazing piece all those years ago. Bring me my Tardis.

« Maestro, 92, thanks each member of the orchestra

Do you wear rubber bands? »