We began playing the Shostakovich quartets in 1969

Alan George of the Fitzwilliam Quartet has been reflecting on playing a great modern cycle from the time of its inception until now. Music history in the making:

The Shostakovich connection goes back to our first year in Cambridge; those of us who were there then as students gave our first public concert outside Cambridge in June 1969, which saw us playing No. 8. This was kind of on the cards from the beginning; three of us were in the National Youth Orchestra, and got together to form a string quartet in Cambridge as soon as we arrived. We were all violinists, so I had to change to the viola! We’d done the Tenth Symphony in our last concert with the NYO and it rather infected us, so playing the quartets seemed the natural thing. So after that, while still at Cambridge, we just learned a few more; hardly any of them were played in the West apart from No. 8. We were so lucky to be able to go straight from undergrads at Cambridge to being the Quartet in Residence at the University of York, and we brought it all up here with us.

There used to be a place called the Anglo-Russian Music Shop, next to Foyle’s, and one day I saw an LP of Quartet No. 13, which I had no idea existed; I bought it and listened to it, and it just blew me away, so we decided we’d like to play it. But there wasn’t any music available, so a good student friend of mine (the writer Erik Levi) suggested that we write to Shostakovich. I got an immediate reply from him saying that when he got back to Moscow he would send the music and that he was going to be back in England in November, so if it happened then he would come to hear it. It was really rather a bombshell – we had had no expectation of anything like that, as I didn’t even know that he was coming back to Britain again. Sure enough, a few weeks later the music arrived with another letter, saying he still hoped to be able to come. I had a phone call from the Hochhausers, who were managing him at the time, informing me what train he was going to be on and what kind of accommodation he’d need; we got the university to fix everything up and I went and met him from the train, and it was as straightforward as that! It was unbelievable, life-changing in a way. Every time I walk to the station it keeps that memory fresh: I don’t go up to the university that much any more, but just being in that hall is enough for me to picture exactly where he sat.

And it all developed from there; Decca wanted us to go on and record the whole lot, and I’m glad to say the recordings did get a bit better over the course of that project and we got some very good reviews which led to the label asking us to do even more. In many ways we were running before we could walk; we’d come out of Cambridge and gone straight into this amazing residency at York that had enabled us to rehearse, do concerts and find our feet; but with the Decca contract under our belts we were always struggling to keep up, both with the recordings and with the reputation we were forming. It was quite tough, actually, and it put a lot of strain on us for a while. But the origin of it all was just being in the right place at the right time. 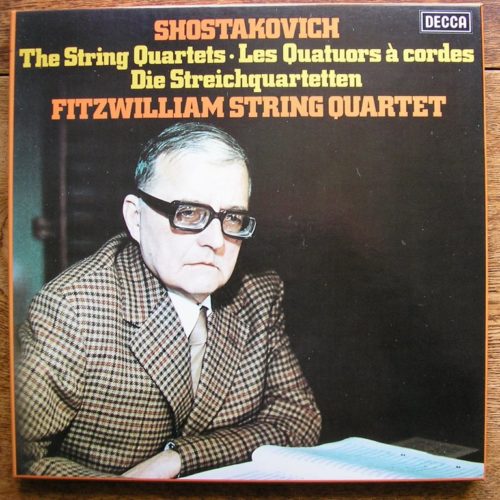