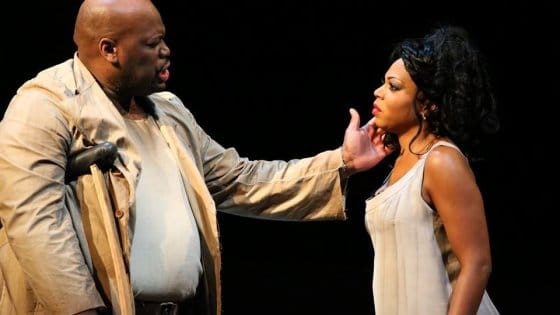 So why did Gershwin write an opera about African-Americans?

Joseph Horowitz asks the question in a 4,000-word review of the Met production and offers no answer.

What he does highlight is how offensive the opera can appear to African-Americans.

He writes: James Baldwin in a 1959 essay in Commentary liked both the novella and the opera. “DuBose Heyward loved the people he was writing about,” Baldwin opined. And Porgy and Bess—“until Mr. Preminger got his hands on it”—was “an extraordinarily vivid, good-natured, and sometimes moving show.” Baldwin’s complaint about the characters (shared by Lorraine Hansberry) was that they embody “a white man’s vision of Negro life,” that they “veer off into the melodramatic and the exotic,” that—a form of envy more germane to Heyward’s psyche than to Gershwin’s—they seem to speak “of a better life—better in the sense of being more honest, more open, and more free: in a word more sexual.” That is why “Americans are so proud of the opera—it assuages their guilt about Negroes and attacks none of their fantasies.”

But what if Gershwin was not writing about ‘Negroes’ at all? What if he had other folk in mind?

That’s a suggestion that I have just pursued in Genius and Anxiety.

It opens up new avenues of inquiry.

« We began playing the Shostakovich quartets in 1969