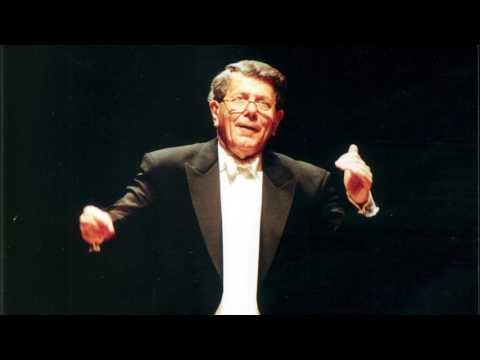 A fine conductor has died, at 92

We have received notice of the death today of Raymond Leppard, a leading figure in British music, prolifici recording artist and long-serving music director of the Indiannapolis Symphony.

The Indianapolis Symphony Orchestra announces the loss of a long-time artistic leader and friend, as Raymond Leppard died earlier today in the presence of his closest friends and husband, Dr. John Bloom. Maestro Leppard, Conductor Laureate and Music Director from 1987 to 2001, was 92 years old.

A harpsichordist in 1950s London, he became involved with the period awakenings of Thurston Dart, Neville Marriner and George Malcolm. In 1963 he presented a breakthrough Monteverdi production at Glyndebourne. In the 1970s he was principal conductor of what is now the BBC Philharmonic in Manchester.

A friend of Benjamin Britten’s, he conducted his operas at the Met, Covent Garden and elsewhere.

But this is what he did best.

« Weinberg, via Mendelssohn and Mahler 5