May we offer you a little Luto as an appetiser…?

… not to mention a Hindemith encore.

Close your eyes during this performance of Lutoslawski’s Concerto for Orchestra and you could easily imagine this was an extra item offered by the CBSO in tonight’s already generous programme.

In fact it was a pre-concert taster given by the Royal Birmingham Conservatoire Symphony Orchestra, expertly rehearsed and conducted by Michael Seal. Seal’s own history is a shining example of the links between the RBC (from which he graduated) and the CBSO (in which he became a second violin principal, and of which he is now Associate Conductor).

Seal secured from his young charges sure-footed rhythmic impetus, a richness of sound allied with clear individual instrumental detail, and an astute sense of balance and sonority. The future of orchestral playing seems assured.

Then came the CBSO, many of whose players teach at the RBC, their programme beginning with a Mastersingers Overture silkily flowing rather than massively portentous (Wagner doesn’t automatically imply “heavy”), almost gloriously Hollywood at times under the fluent conducting of Fabien Gabel. The cheeky woodwind deserved a Hans Sachs clip round the ear.

Simone Lamsma was soloist in Bruch’s Violin Concerto no.1, bringing to this well-loved (never let it be said “hackneyed”) work a sense of spontaneous, improvisatory freedom and a deliciously throaty tone in her lower registers.

Lamsma was always totally at one with the music and indeed with the orchestra, the orchestra collaborating attentively and then blossoming in their own tutti passages.

Her undoubted virtuosity was unleashed in her encore, the athletically-bowed finale of Hindemith’s Solo Sonata, a torrent of notes disguising perhaps any absence of genuine musical content. 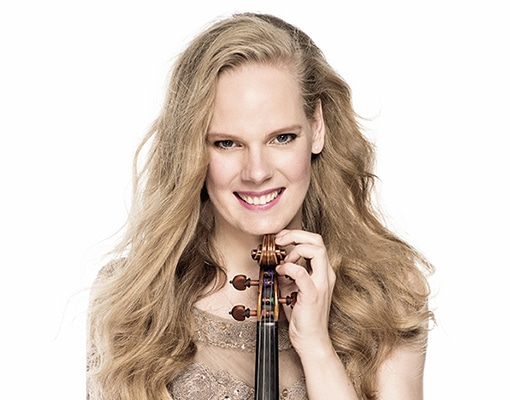 Genuine musical content there is a-plenty in Bruckner’s Fourth Symphony, perhaps too much in the prolix finale, where the composer not only looks back at previous movements but tries to juggle the wonderful new thematic material he introduces.

All woodwind were similarly vocal, and the strings were delicate and versatile in the huge demands Bruckner makes of them, Gabel’s reading all of a sweep until defeated by the pitfall hiatuses of the finale.

Gabel’s body-language is unaffected and genuinely communicative, and he made much sense of this pivotal work, built upon baroque procedures, Romantic gestures, and presaging the methods of Schoenberg and his Second Viennese School.